Lose yourself in Lansdowne (part 1)

June 03, 2008
"Preparing" for our trip to Lansdowne was anything but easy, simply because of the scarcity of information. It's got to be the first time the internet hasn't overloaded me with unwanted (or wanted, for that matter) details. So, for a family that likes its vacations as organised as possible, we didn't have much to start off with. We knew (roughly) the route to be followed, and the approximate duration (6 hours supposedly, but don't let them fool you). Fortunately there were enough indicators to prompt us to book a place to stay before we left, so we reserved a room in the hotel Fairydale (what a quaint name!). A good decision, since there are hardly any facilities for tourists in this small town that serves as the headquarters for the Garhwal Rifles. 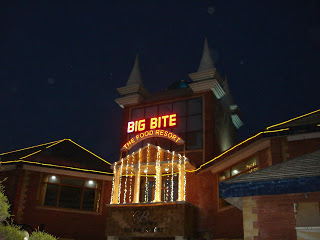 We left on the 26th of May at 4.30 pm (a grave, grave mistake, as it turned out), following the route Delhi-Meerut (bypass)-Mawana-Bijnor-Najibabad-Kotdwar-Lansdowne. Not as easy as it looks. We stopped for a bite at Big Bite (sheesh), a really nice eatery on the Delhi-Meerut bypass, (though there's also a Natthu's and a CCD up ahead, which we obviously discovered only after we were well stuffed). The journey was pretty uneventful despite the dark, and warnings of dacoits along the way (I wish we'd met some, it would've been so exciting! Don't worry, I was well prepared. I planned to hit them hard on the nose with an umbrella). Uttar Pradesh is pretty infamous for its (lack of) road signs, because of which we lost our way several times. And the people we asked for directions were equally confusing; we got convoluted explanations like "go straight ahead till you reach the end of the road, then keep going straight (how do you go straight when you've reached the end of the road?) till you come to a fork with two roads inclined at 45 degrees to each other..." Bleh.

The hills started after Kotdwar, and so did the bumpy ride uphill. The roads were enough to make anyone roadsick, they were probably worse than usual because of the recent storms and rains. And worse, they didn't have any markers or directions. Dangerous when you're climbing in the inky darkness, like the fools we were. Anyway, we feasted on the sight of the flaming orange half-moon that hung in the sky slightly below us, and lost our way several times, went through the (dead) "city" (a name for what I would call the marketplace), and finally reached our destination at 1.30am. Relief! The chilly night air jogged our senses as we were shown to our room and went off into a blissful slumber.

Note (19.02.2009): I realise that "Lose Yourself in Lansdowne Part 2" never happened. But I did write a compact account here, so do check it out. More soon, photos if nothing else, as soon as the current workload decreases.