On turning 19, Amitav Ghosh and the play that wasn't

Growing old is like being increasingly penalized for a crime you have not committed. - Anthony Powell

Another birthday has come and gone. I turned 19 on Saturday...next year I'll be 20...and 20 years later I'll be 40...oh boy, do I feel old. But I made a nice resolution this time--to be happy :). And that's not as easy as it may sound. I've been tried on my birthday itself, when the internet refused to work so I couldn't check my birthday wishes. I think it was some kind of judgment on me for telling HB condescendingly that I couldn't see how she lives without it and that I possibly couldn't. I've become a victim to the addiction.

Last Wednesday, Babbitty and I went (escorted by my dad; talk about over-protective parents) to Teen Murti Bhavan to attend an interaction with Amitav Ghosh!!! I swear, we're totally turning into English (Hons.) nerds. Except I guess I already have been one for quite awhile. Oh well.

Amitav Ghosh is here to promote his latest book Sea of Poppies. He's written some ten other books, of which me and Bab have only read The Shadow Lines because it was in our course. Every time someone mentioned this book we got excited and high-fived each other. And it was mentioned a great many times, since Teen Murti Library is the place where the narrator of The SL makes several important discoveries, and also where Mr. Ghosh used to come regularly, so the people were all rather dewy-eyed about his "homecoming". So anyway, he read a passage from his new book, and then a load of people asked him intellectual-y stuff (an old lady in front of me kept chuckling loudly for no reason whatsoever) and then came our favourite part--book signings! We decided to buy the new one because thrusting a piece of paper at him would look really cheap, and buy one we did even though the price nearly made us pass out. But after availing of several discounts, including one for students (how I love being a student. It can be so useful sometimes) we finally got it and split the money equally. And he signed it to both of us, so that bonds us for life. AND he signed my copy of The Shadow Lines. Yay! 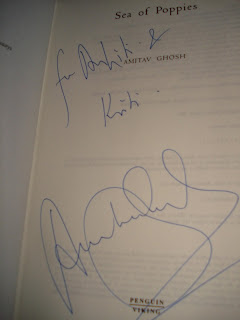 Amitav Ghosh (while signing): Ah, so you both are sisters!
Me (composedly): No, we're classmates *smiles sweetly*
Bab (excitedly): No, we're English buddies!!! *jumps up and down*

Anyway, check out his site.

And yesterday, we nerds decided to go watch the play Ghasiram Kotwal (by Vijay Tendulkar) at the National School of Drama, but it was not to be. They decided to cancel the 3.30 pm show. So I went to Bab's house instead, and boy, was I glad the play had been cancelled! We had a whale of a time, watched Enchanted (oh, how I adore senseless, funny, chick-flick-y, happily-ever-after Disney movies!) and had mango-shakes and pizza, and looked through her Harry Potter stuff and her school stuff...and so on. She's got an amazing room, by the way (which is stuck in my memory, but don't worry Bab, I won't copy anything). I returned with a considerable amount of (borrowed) stuff and the satisfaction of a good day spent.