July 16, 2008
Well, technically, summer was never here, it's been more of monsoon-ish, sluggish, humid weather. But whatever. My latest activity has been a list titled 'Why Summer 2008 Was Not A Waste', aimed at making me feel better. Which it is magnificently failing at.

I finally finished my second 'major' read of the summer, Exodus by Leon Uris, and it's absolutely fabulous.* In a bittersweet way, because nice people die in the end. It is, as far as I can recall, the first 'historical fiction' I've read, and the story revolves around the struggle of the Jewish people in the post World War II era and the birth of Israel. I've been trying to research the factual accuracy of the book, and from what I've found, it seems to have done justice to the real thing, except maybe this.

Now it's my house that's turning into a zoo. Especially on rainy days. SPOTTED on Monday outside my drawing room: Huge Ugly Crow 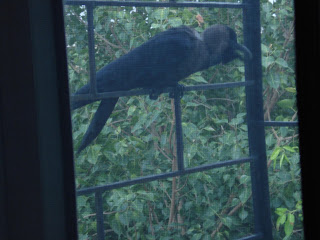 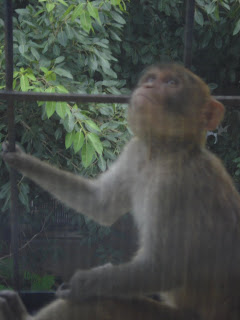 In fact, the monkey hung around all day. I rather thought he had taken a liking to me, but he's disappeared now. On second thoughts, I guess it's unlikely that he would like me because I took pictures of him and made faces at him. Oh well.

And (alas) college officially opened today, but we seniors weren't wanted so we stayed home. The anti-ragging laws show that DU does have some sense after all. Besides, the freshers don't have anything to worry about as far as I'm concerned, because (a) I firmly disapprove of the concept of ragging. I think it's dumb; and (b) I'm physically incapable of scaring anyone. Or, at least, that's what most people believe.

* Since I wrote this post, many years have passed, and I've learned a lot more nuances about this chapter in history. Perhaps if I had known it then, I would have shown more restraint, but one keeps learning.