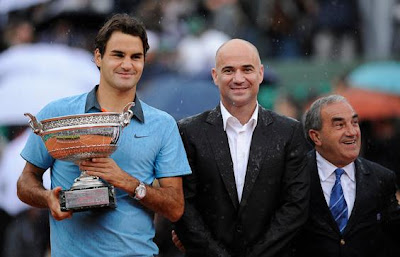 Ah, what a day! Or rather, what an end to it. Being fully aware that my tennis-related posts never garner many comments, I still feel the compulsive need to post about this...epoch in my life, if you will.

Since my TV still refuses to chow Star Sports, I haven't been able to watch a single tennis match this year. Why don't you get it repaired, you might ask. It's because I'm lazy. Thank you. So anyway, I couldn't possibly miss this particular match, where Roger would possibly make history. With Nadal safely out of the way and his conqueror across the net, Federer finally did what he had been waiting for for so long. No wonder he sobbed. I like guys who sob, I've realised. Not those who sob all the time, you know, but it's nice to know they can and be reminded once in a while. Whoever started this concept of crying being a womanly thing anyway?

Of course, Nids' couldn't stand it. She thought he was weird, and strangely enough, that I was weird too. She also thinks Mirka is weird and crying is weird. Weird.

The match wasn't too long or close, to say the least, except the second set. But that was probably because Federer was too distracted by the dude who got onto the court and started waving a Spanish flag in his face. Even tried to drape it around him and put a beret on his head. (I missed that because Nids' insisted on watching Wizards of Waverly Place for some reason. She is such a kid.) But anyway, shocking really. All everyone was thinking was "it could have been a knife...". A Monica Seles all over again. And plenty of people could be out to get Federer... 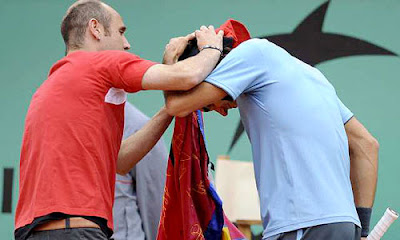 But funny man, really. Imagine getting 30 seconds of fame for waving a flag. Probably had one drink too many. And not a word about the incident in today's paper, strangely.

But when all was said and done, Federer was in total command. He hardly made any mistakes, played the most artistic shots and deserved his win. No one could have looked happier...oh wait, he was crying...when presented the trophy by his good friend Andre. I couldn't understand his victory speech because he spoke in French. Seriously, he is so awesome. He speaks four languages. Fluently. He has named his latest prize "Coupe des Mousquetaires" and introduced her to us on Facebook. He is so awesome. (Have I mentioned that already?). But yeah, he is.

Oh, what does that "coupe des mousquestablabla" thing mean? Anyone? I did learn some new French words yesterday. Jeu, quinze, trente, quarante. Forgotten how to pronounce them, though.