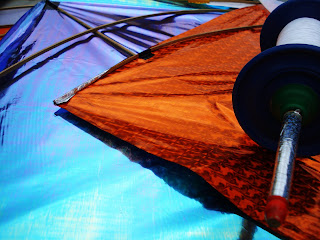 Having finally "flown" a kite on Saturday the 15th of August, for what I believe was my first time, I got thinking about why kite-flying is the ritual on Independence Day. I mean, I understand the beauty of the colored diamond-crepes floating around up above the world so high, and how they could be a symbol of freedom. But then, they are controlled too, aren't they, by a string from the ground or a rooftop?

Not that the kite always obeys orders, no sir, for the pretty shiny purple one I chose was gormless enough to get stuck behind several obstacles no matter how hard I tried to maneuver it (in my defense, I believe it was defective).

Nonetheless, the sight of the dozen or so kids strewn along my route to german class on Sunday morning, kids who might normally be begging on the street or occupied elsewhere, standing with eager faces turned skyward and hands deftly and vigorously tugging and pulling at seemingly invisible strings, answered my questions somewhat. The colored diamonds were back in the finally-cloudy Delhi sky, and also, I believe, was the hope for a new day and a new beginning.