June 09, 2010
I noticed that my June calendar is nearly filled out. Already. Hmm, this is different. I mean, it is the birthday month and all, but a few empty spaces wouldn't hurt! And here I go again, teetering on the see-saw that won't let me decide whether I most enjoy being lolling-on-the-couch jobless, or can't-catch-a-breath busy. Methinks it'd be nice to have someone to balance it out, for a change.

I've been catching up with the Blogosphere today, being one of the few days in the past couple of weeks that I haven't had to venture out. It's strange how all of us, and you all know who I mean, were crazy about our blogs three years ago and couldn't wait to tell the world what we'd been up to, and now we have ever so many posts beginning or ending with the "I'll be more regular" promise. The archive betrays the steady exponential decrease and makes me wonder why we've made ourselves too busy to stop and think blog. June resolutions, anyone? I think Lemon's 30-day experiment might be a bit too much for me to handle, but I hope to be able to change the dismal monthly numbers for good. 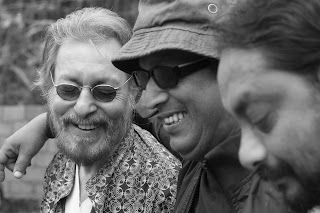 ed out to be quite memorable, with the hard work of the last fortnight falling right into place. In the first week of June, we practically lived in the American Center, complete with crazy security, air conditioning, and a lot of complaining. Manning the reception is quite overrated and grouchy, what with all the fake smiles and creepy old men trying to make conversation. Karan kindly offered to let me read his Irish play by Synge (though he'll claim it's written by DH Lawrence or GB Shaw in turns) but I was quite bemused when I realised he wanted me to read it aloud with him in a tragic voice and all. The evening's jazz fusion concert by HFT was breathtaking, and also rather apt, with a rebellious number called "Parking Space" stealing the laughs.

But the best part of the two days was easily the dance workshop, which turned into a volunteers' party as they found the perfect legal way of neglecting their duties for two hours. Jumping around, chasing each other across the room and pretending it was all dance was no mean feat. And the partner exercises were annoying because you had to fall on your partner and owing to my (misleading) tiny appearance, no one wanted to fall on me. After a lot of persuasion I convinced the partner, and no, I did NOT let him (fall) down. So there. 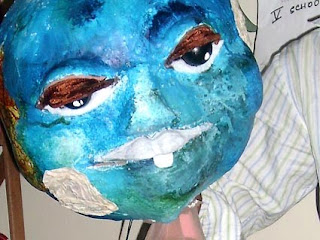 The fest was rounded off by an enchanting little puppet-theatre performance called "The Little Blue Planet", which was unlike any of those street puppet shows I've seen as a kid. I think the adults enjoyed it more than the children did, judging from all the hooting that ensued when it ended, and the (volunteers') crazy rush to shake hands with the puppet. Ah well, it brought out the child in all of us, I suppose.

All in all, I'm glad I didn't turn around despite the zillion times I was sorely tempted to.