April 28, 2011
An advantage of not swallowing the info in travel brochures and well, not planning every moment of your trip is that you can actually have some time for offbeat stuff that you'll never find in one of those books.


Such is the situation we found ourselves in on the final day of our trip. Try as we did to wake up early for a lunch date with the bro's friends, we ended up keeping them waiting. I blame Saturday. Their idea was to take us to one of the residential areas in the suburb called Choa Chu Kang (it was that or Little India which I strongly vetoed) and then lunch. We arrived at the Choa Chu Kang station by MRT where they were waiting for us, and then got on the Bukit Panjang LRT line for a sort of round trip around the area. Now this line is totally cool. The girls kept us entertained with a load of facts that they claimed to know because they paid attention to Social Studies in school, and, well, because they've lived in Singapore for ages (like the color coded buildings and how clothes are dried on bamboo poles). The line passed pretty close to some of the buildings, in fact so close that you could probably look inside the houses, but as soon as it gained proximity, it's windows automatically misted over to a smoky opaque.

We returned to Choa Chu Kang's Lot One mall for lunch, debating over several exciting-looking exotic cuisines before deciding on KFC ("that was such a fail!") and then the bro and I decided to visit the Jurong Bird Park for two hours.

It was SO AWESOME. I've never seen anything like it. I've been to the Bharatpur bird santuary but it was nothing compared to this - though of course in Bharatpur the birds are free to fly out and migrate and you can't get this close, while here they're pretty much closed in. I'm not sure I like that idea much; birds are meant to fly, after all.

The park is huge and there are several trails to choose from - we decided on a walking tour this time rather than a tram. Armed with our map and rucksacks (and cameras), we started on one leg of the trail, beginning with Penguin Coast which was in a wooden building shaped like a ship, and like a refrigerator inside. Like everything in Singapore, it was wonderfully maintained, with neon information tablets and LCDs. See some penguin pictures here. 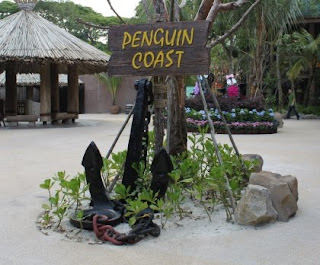 Next up was Macaw Island - macaw's are gorgeously colorful and extremely noisy. Just so you know. 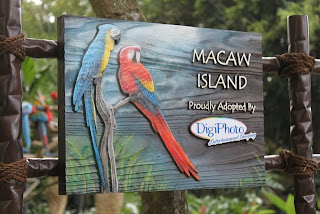 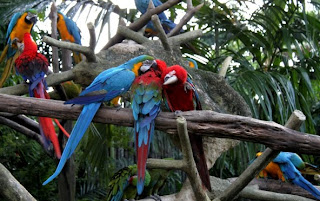 Then some orange-y birds with long necks that I can't remember the name of, then World of Darkness with its various owl species. Then some pretty flowers (hee), scarlet ibises, attempts to squint at the Bird of Paradise which remained adamantly hidden, and then Lory Loft, which was the best part. Lories are tiny brightly colored birds, sort of like parrots, but they're quite friendly and if you buy bird feed ($3) and hold it out, they will come and perch on your hands, arms, shoulders, and in my case, head.

I thought this sign was so creative - each letter is a bird in flight! 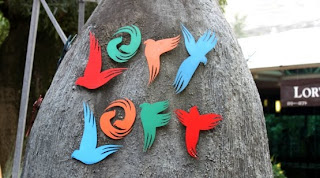 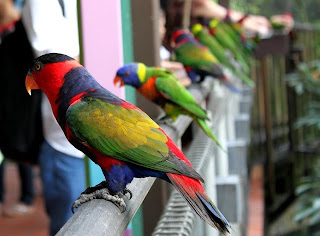 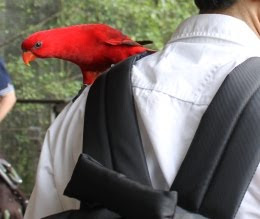 And this guy's cap! 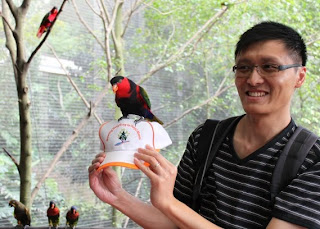 Did you know ostriches were descended from dinosaurs? 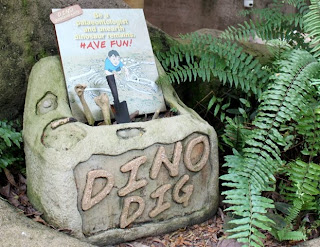 The sign says "be a palaeontologist and unearth dinosaur remains. Have fun!". For the Ross in everyone.

Then Pelican Cove and a lake of swans (heh) at a run, because the park was going to close down and we didn't much feel like camping with the birds. 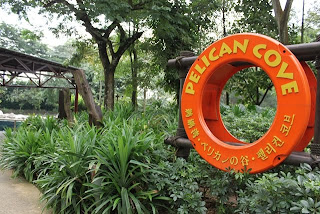 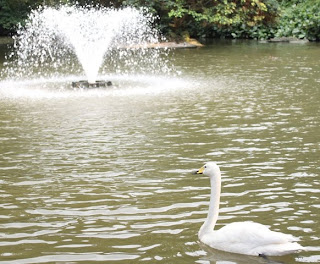 Please do not use pictures without permission.