day, I intended to do a post about my journey with the Harry Potter books, because they deserve it. Actually, I wanted to do it before that, right before or after I watched the last movie. I probably never would've thought of it if I hadn't read this tribute post that made me teary. So, coming back to Tuesday, I thought I'd do it then because I happened to be watching the first movie on TV, which, by the way, is really really good and I think they should've let Chris Columbus direct the entire bunch. But it didn't work out, so I thought today would be a very cool occasion, although I just got distracted because I remembered that Pottermore was supposed to open to registrations today, and now I've been there and I'm too late. (Image: fanpop.com)


So, the first movie. Important, because that is where it all began for me. That is when the world of Harry Potter merged with my own. The first four books had been around for a good while until then, and created quite a furore, but true to my spirit of going against the tide, I refused to waste my time on books about fairies and magic wands. Yeah, that's what I thought this was about. Naive much? 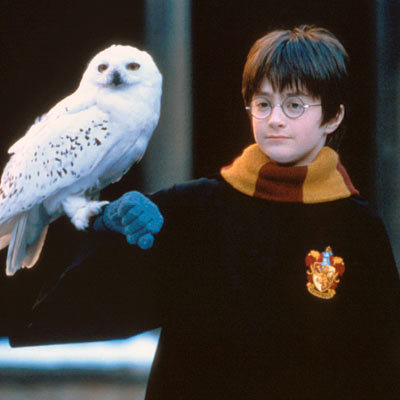 all, but what I do know is that it was a magical few hours, literally. I enjoyed it so much and me and bro couldn't wait to get hold of the books. The first two were procured without further delay from the school book fair, and the third and fourth borrowed and devoured within a few wonderful weeks. Ah, addiction.


The wait for the fifth was rather unbearable. We thought we'd be smart and pre-order a copy, being new to this whole process. Our copy came a week after everyone else bought theirs for a lesser price, and in that week I was cheerily told a major spoiler by a friend over the phone. That trend was to continue into the next book, which, though I did get on time, I couldn't finish because sharing was involved and so before I knew it, I found myself at school where a classmate marched in and loudly announced Snape's and Dumbledore's fate in two fateful sentences (he has been duly punished, though), and then in the bus some stupid girls could not stop gossiping. Having learned my lesson, I stayed up all night with the seventh and managed to avoid any such revelations. Whee. Mum was maaaaad.

These books have been an important part of my life, and I know not everyone will really get that. Everyone (who reads) has their own favorite books that they connect with and turn to for inspiration or answers or just to feel better and take their mind off other things. That's the thing about books, they're portkeys to a whole new world. I've had several of this kind: Enid Blytons, the Anne series, Cecelia Ahern, Jane Austen, and Harry Potter. The whole month leading up to my 10th board exams, I read the fifth book, over and over again. I especially loved reading the pensieve scene i n which Harry sees his dad and his friends after their OWLs. I think James' and Sirius' nonchalance towards the whole examination drill really inspired me. I think it also might've worked some magic on my own results that year!

I've kept scrapbooks, bought keychains and 3D playing cards and the supplementary books, made spell lists in alphabetical order, started and abandoned an HP encyclopedia, tried to convert the books into poetry, tried to play the games, been through a fan art craze, started an HP blog, started an HP fan-fic, found parallels in philosophy class from race and religion to media ethics in these books, and even written two lengthy term papers on the series for my literature degree in college, which, I might add, is like the ultimate tribute.

People have been talking about the end of an era, but I don't think it ever will be for those who really love them. That's another thing about books, isn't it? You never have to say goodbye. All you have to do is turn to the first page, and it's yours again. You're there.