The golden days of tennis 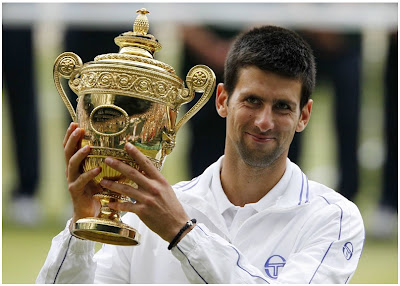 And there we have it. Wimbledon wasn't heartbreaking, after all. Congratulations to Nole, for playing some wonderful tennis and earning this well-deserved trophy and this number 1 ranking, after all the brilliance that he's been this year on the tour. The fact that he beat Nadal to both is just the icing on the cake (sorry, Sonal!). This may not last forever (what does?) but it's here, now, and that's really enough.

As my friend Sonal has pointed out, this blog has gone rather long without a tennis-related post. There hasn't been too much to gloat about in that area for a while, and though I really had a post planned out after Roland Garros, I used up all the steam replying to taunts on Facebook and then got rather bored of the whole idea. Tennis news and reporters haven't been much fun of late, simply because they tend to sound pretty idiotic, what with writing several hundred words about a player's English or labelling people the "greatest of all time". The latter is something I find pretty naive; how can you compare a player from 20 years ago with one from today and claim the other is "better" because he won more Slams? Context, as so many forget, is très important.

So let us not forget that Federer started his career before Nadal, and so it's probably natural that he wave goodbye before him too, whenever that will be. Let's also not forget that Nadal's major challenge when he started winning the big ones came in the form of Federer, while in Federer's early years on the circuit there were a number of wonderful players, including but not limited to Hewitt, Roddick, Safin and Sampras and Agassi were still around. That's not to say that Federer was the only challenge for Nadal, but funnily enough he seems to be the only one people talk about as fading before Nadal's racquet. And while Federer's domination in those years was an exciting thing for his fans, it probably wasn't for tennis.

So today, after all these years of doing what he's done in and for the game, if he doesn't win every single Slam because other players are playing very well too (Nadal isn't dominating either) it's a great thing for tennis as a sport. If this indeed, to quote a number of sports journalists these days, is his "twilight" or "he's fading out" or "aging gracefully", hasn't he earned it? But I think it would be nice to let him do it on his own terms, without branding him with fickle headlines every other day. After the French semi-final where he defeated Djokovic, these same people were lauding his sublime skills and praising him to the skies and buzzing about his "return"; two days later they had once again written off his career. Like Andy Roddick said a few years ago, "You guys are brutal. Absolutely brutal. All he's done is won a Slam and make it to two finals? I'd love his bad year, I'd love it." Apparently, only winning every Grand Slam makes a player truly great.

And then there are the kind of commentators and journalists, my former classmate now one of them, who say things like "Rafa is only 25 and he has 10 Slams which is more than Federer did at that age so he's the greatest and he will break his record" - well, life, luck and a bunch of other brilliant players notwithstanding. And so what, really? So what if he wins more Slams? Did people who love Sampras hate him or undermine him when Federer won a couple more Slams than him? I hardly think that Federer will somehow become less praiseworthy just because Nadal has a couple more trophies than him on his shelf.

I will never like Nadal even if Federer / Djokovic were to vanish suddenly. I have nothing against him as a person, I simply don't enjoy watching him play. His game is all about power and bulldozing after the ball, and some might find that attractive. To each her own. Federer's game is a thing of beauty and just so artistic. Stylish. And that's what makes it so endearing to watch. It helps when a player can crack a smile now and again too, of course. As for the tears, I always rather admired them, but that's a whole other post.