October 23, 2011
It is a truth universally acknowledged that I don't really cook. Indeed, this was the main cause of anxiety for family and friends alike when they learned that I would soon be off to foreign shores and my only means of survival would be my own cooking. Of course, that isn't really true. London has excessive variety when it comes to any kind of cuisine, with bakeries, bistros, cafes, vendors, restaurants, fast food chains and ice cream and yogurt parlours galore. But when you're a poor student, an Atlas ever conscious of the loan on your shoulders, you can't really afford to buy every meal. So you go grocery shopping, basket and all, and take each day as it comes, hoping you haven't run out of salt only to discover it when the potatoes are burning themselves on the gas hot-plate-thing.


The hot-plate-thing is one of the really annoying/ridiculous/impractical/irritating things about this place. The other being the bathrooms, but don't even get me started. What is the point of having a separate hot and cold water tap at each end of the basin, really? What the hell do you do with them? Open both and take turns to freeze or burn your hands? Not that they stay open - they're smart-taps, except not really, because if they were really smart they'd shoot water when they sensed your hands but these ones require a hearty push, which suffices as my daily exercise. They also stop spouting water of their own accord, which would be cool except it isn't when your hands are all soapy and you haven't friggin' finished washing up.


So the first time I cooked (cooking here defined as anything that requires heat and changes color/shape/texture/taste after being exposed to it), I was just attempting to fry an egg for breakfast. So there I was, having put oil in the frying pan and broken the egg into it, and nothing happened. The egg just sat there gloppily in a pool of oil, while I stared at it, losing weight and wondering whether I'd done something wrong. After many many long minutes of coagulation, it finally began to make weird but welcome sizzly noises, and I set about making toasts. The world was sunny again. Which is really rare in London. 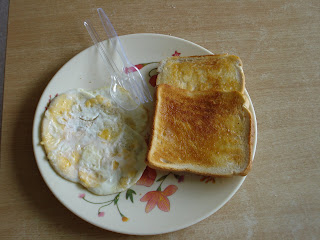 First forlorn egg
Since then, I've got used to the burner tantrums, and I just circumvent them by studiously ignoring it while it heats up angrily, giving it my undivided attention when I know it's going to be submissive. Mostly I cook simple things like vegetables, omelettes (my flatmates think I only cook eggs, which is a bit unfair because I don't even cook them every day, but somehow always happen to be when they're around. It's a conspiracy.), cheese toast thingies, and I managed to find paneer which was a moment of triumph, really. The microwave is my best friend, for everything from tea to heating up the canned chicken-in-white-sauce, to 'cooking' buttered veggies and biryani (read: dumping a bunch of ingredients into a microwave dish and letting it do its thing). Not half bad. 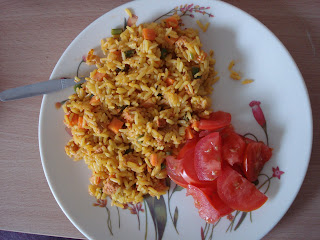 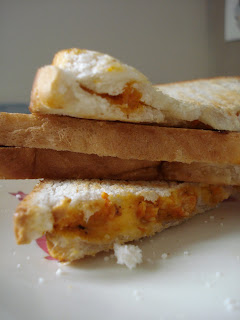 Chicken and cheese toasts
I'm not a huge fan of sandwiches here but uni does have some nice pasta and Cornish pasties and samosas (though they're really quite different) and cake. I also had the most delish falafel wrap which I'd planned on making a weekly ritual but I now realise that didn't happen. I'm on it. I also tried some free cheese at the Bloomsbury Farmers' Market. I never want to have cheese again. And we had a flatmates' dinner comprising of frozen pizzas and a big salad. As in we bought them frozen and baked them. But you knew that already. 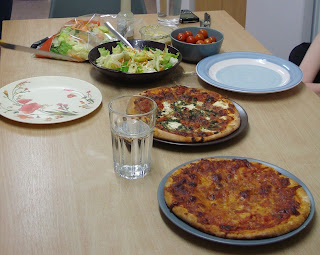 My cereal is still Chocos that come all the way from India (I brought some with me and bullied a friend into bringing more. They're nearly over now as is life as I know it.) and I'm almost out of junk food. Maybe I'll buy some of the weird looking onion bhajis and samosas (whatever that is) from Tesco. I already tried their 'pilao' rice and chicken tikka masala (heh) without dire consequences. But why do you care?