The journey from platform 11

But these are stories for another day.


This is a tale about the first of my travels in a new land - hopefully the first of many more to come. So there I was, hurrying along to King's Cross on a windy Saturday afternoon with S (our destinations were different though). An open return ticket later, we checked the board for the next outbound train, and raced along to platform 11 with minutes to spare. There was no running through barriers here, and the train itself looked rather ordinary if more colorful than the Indian ones. After triple checking to make sure that it was indeed a train to Cambridge, we said our goodbyes and I settled myself in a seat across from a nice young woman. (Yes, I'm aware that made me sound about 45.) We were soon joined by an elderly man wearing a weird sort of jacket. Seemed the talkative type. He was. Every few minutes he would start telling a story, mostly talking to the nice young woman who happened to be sitting next to him, reading (because I refused to catch his eye) and after each anecdote he would tell her to "anyway, enjoy your book" before starting all over again. For 45 whole minutes. I read my book and ate my unhealthy McDonald's burger and stared out the window at the pretty fields, and she eventually gave up trying to read and even laughed at his jokes. I thought maybe she didn't mind him much, but when we got out she said "don't listen to that old man, Cambridge is actually quite nice". A good start, I should think.

Cambridge was nice. I saw, accompanied by H (or rather, following with my suitcase and camera), churches from the outside and inside, many of the colleges, bridges and canoes, and a man playing the guitar from inside a trash can on my way from the station to the destination. 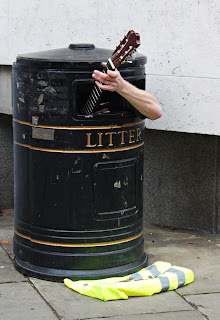 He was good too.

It was Guy Fawkes night and most of Cambridge was supposedly at Jesus Greens for the fireworks and fair. But M and I were too busy tucking into a huge dinner (roast chicken with chips and onion rings and salad for me, lasagna for her with other things that I didn't notice because I was too busy with my plate) at a quiet pub thanks to her discount-card-procuring superpowers. We actually thought we'd make it in time for the fireworks, but the long train of people coming back was a clue. Nonetheless we tarried on despite the cold and the damp, in hopes of toasting ourselves near the big bonfire. But it was not to be. The bonfire was big alright, but onlookers were fenced out about 50 feet from it because, I suppose, they might catch fire and then what would they do. Oh and there were crazy rides and food, none of which we partook of, being rather full. We did wander around in quaint streets, stepped into the Maypole (the busiest pub in the area) and passed the Eagle, the pub where DNA was "discovered", culminating with a stop at Sainsbury's for cookies to go with the hot chocolate at home. 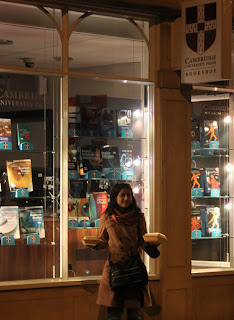 On Sunday, I wandered around a bit by myself, stared at the river and wound up outside the Round Church, the second oldest building in Cambridge. We also went to the Fitzwilliam Museum, where H wouldn't let me look at Matisse's paintings because they were boring and he wanted to go in pursuit of a mummy named Hermione (we never found her but there were plenty of others to make up for it). That night there was another bonfire - accessible this time - and toasted marshmallows and sausages and mulled apple juice/wine and for some reason, sparklers. 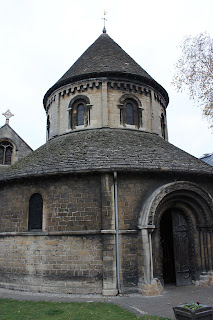 Monday was a meticulous following of our "itinerary", before classes beckoned M and London called me back. A long climb up the very narrow spiral staircase of the tower at the Great St. Mary's Church - passing the bell room and a room where someone was playing the piano - and all of Cambridge was before our eyes. A walk through the manicured lawns of Trinity college (there's a secret behind those lawns, aye. Apparently you only get to walk on the grass if you're a senior fellow. I really regret not trying it to find out what would happen.) - I was going to comment about its Hogwartsy-ness when a group of people in robes walked out and I got very distracted indeed. Then a quick stop at the university library which is huger than anything you can ever imagine - I honestly think being a member of staff there would be utterly depressing - and it was time to pick up my suitcase and walk to the station. The journey back was quite similar; same book, a Snickers bar and a girl from my own college this time. I just sat there in quiet happiness, and then I was home. 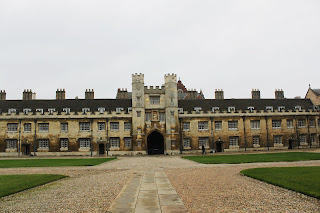 I like calling London home. Even if all I have is a room. Sometimes, all one needs is a room of one's own.

PS - And here's a ginormous thank you to M and H for taking out huge chunks of time to show me around and for generally putting up with me and my camera. You rock.
PPS - Look out for more (and better!) photos :)