February 17, 2012
Yes, you read that right. We were confused by all the kilts and bagpipes too. 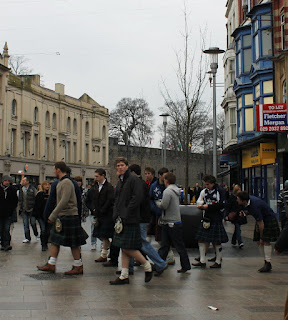 The city centre was electric. Thronging with people with dragon hats, face paint, bright flags and scarves and even fluorescent orange (disgusting) body suits. There were long queues everywhere, whether you wanted food or the loo. After some asking around, we discovered that it was the day of the rugby match between Wales and Scotland, and not a friendly one at that. We debated getting tickets but gave up the idea ("that be sixty quid apiece, love") and just enjoyed the energy and some sandwiches instead.


After leaving our suitcases at the tourist information centre for £3 each (usually it's £5 for a locker where you can put both in but because of the game, things were different. Sigh.), we promised the fascinated man at the desk ("oh wow, Indian and Italian! Multicultural!") that we would be back by 5.45pm to pick them up and he wished us a good day (and "arrivederci!"). We commenced what we thought would be a not so long walk to the mysterious Castell Coch, hidden away in a forest. Not the brightest of ideas, though we did see most of the landmarks along the way, including the Wales Museum, the City Hall, Cardiff Castle and Bute Park, and it was a pleasant walk at that. 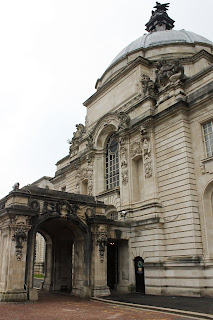 If there's one thing that stands out to me about this trip, it's Welsh people. Each one outdid the other in generosity and general niceness. From the middle-aged group of friends who posed for a picture for Eli ("is that for The Sun?"), to the performer who walked a tight rope while playing the violin, to the shopkeepers at the gas station who had no clue where we were going but gave us directions anyway, to the elderly couple that told us the name of a place we couldn't find on a map, read, spell or pronounce, to the woman we met at the bus stop who gave us detailed directions and insisted on writing down the name of the village where we could perhaps get a bus back since "Sunday is such an awful day to be a tourist in this country!", to the family that was trekking up to Castell Coch and showed us the way, led by an excited five year old who was hunting for imaginary giant lizards and told us to be quiet or they wouldn't come out ("you're going to have a blurry kid in every photo you take!") and also showed us the "blue lagoon" that they were so proud for having discovered but which turned out to be an unremarkable bit of water under a dingy rock; and whose friends eventually drove us back to Cardiff so we could get our luggage before the centre closed for the day ("well, I wasn't expecting to meet lost London girls!"). 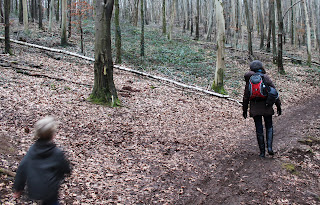 Back in the centre, we ran like crazy to get our suitcases, but though we were ten minutes late they had waited for us. Thank you's and goodbyes were said, and Wales had won 27-13. We went into the St. James Church and sat through some of the evening psalm singing. I just love churches. They calm me down like nothing else. Then to a charming cafe called Truffles for a cuppa ("should I take your suitcases by the front so you don't have to worry about them?") - the loveliest hot chocolate with creamy cream and marshmallowy marshmallows and the tastiest garlic bread I've eaten in a while. Well fed and rested, we thought we'd try to find a pub to celebrate (the victory, of course) but everyone had the same idea and it was a while before we found one that wasn't full. The guy at the door wouldn't let me in without an ID so I tried showing him my 18+ Oyster which made him giggle. The waitress held a tray piled lopsidedly with glasses that fell twice, near us both times ("they really seem to want to fall on you, don't they?") and halfway through our fairly peaceful evening, a door crashed open and two men poured out, embroiled in a film-like fight, toppling chairs everywhere before being broken up by bouncers. One of the men apologised to everyone profusely (!), the waitress came out of shell shock ("they broke the door. Again.") and normalcy resumed. 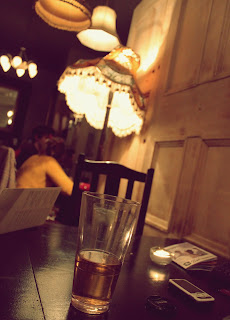 Finally, we bought a cold dinner from Waitrose and tried to find our bus stop to head to Swansea. A woman was sitting there with a load of stuff around her, and had apparently been waiting there for three hours. She was probably extremely glad to have some company because by the time the bus arrived, I knew everything about her ex-husband, boyfriend and five children.

Stats:
London to Cardiff
Transport: Megabus
Fare: £9 (as low as £5 if you book early)
Duration: about 4 hours
Where to stay: We didn't spend a night here but try the YHA website.