BBC forecasted the arrival of snow for today, and though I'm not a fan of forecasts, I believed them. I was so certain they were right that I didn't even bother to prepare myself for disappointment. Restless hours before the snow was due to appear, I positioned myself such that I faced the window and was close enough to my laptop, for Facebook is where the real news is, of course.

I knew London wouldn't disappoint me. I knew it.


I've wanted to see snow for as long as I can remember. I think it's one of those things that if you haven't seen or experienced, you'll always be curious about. Of course it never snowed in Delhi, but it snowed heaps where my grandparents stay and I'll always kind of hold it against my mum that she would never take us there in the winter. I mean think of all the snowmen I would have made by now. Calvin-inspired and everything. Gosh, I was such a deprived child. Snow figured in all of my favorite writing. Snow was the stuff my imaginings of patronus moments were made of.


So you can imagine what today meant to me. I think I was one of the first to see it; being up on the fifth floor, the only way I realised it was by staring at the lampposts which seemed to have a flurry of activity under them. My excitement knew no bounds, but the reaction of those around me was akin to this:

Michel: You know not everyone finds the idea of being pelted with frozen water appealing.
Lorelai: I know, and how sad for them!


My first walk in the first snow was so special. I just wanted to soak in every moment and vision and not miss a single snowflake falling from that blessed sky. The crunch-crunch of my boots on the pavement, the sparkling crystals all over my coat and cap and hair, mini snowball fights and happy people (because the grouchy ones didn't come outside), dinner facing the street at King's Cross, an equally delirious friend, a beautiful city.


There's a tree dressed in white outside my window. Five floors down, I can see people in bright jackets and umbrellas upsetting the fluffy and now rather thick white blanket on the pavement. Little dramas enact themselves on the street. A man seems to be fighting with his girl. How mean. In the first snow too. He's rather animated. I wonder why he's so grumpy. I feel like going and telling him to behave.

So, as I sit here in front of my heater warming my fingers and toes, I know that it may not last. I may be ill tomorrow after having walked in sub-zero temperatures for two hours. The roads may be grey and slippery. The beautiful whiteness may transform into a murky brown.

But right now, the world is magical. And now is all that matters. 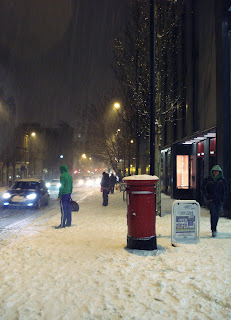