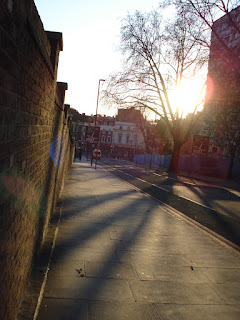 I've been making a movie. I'd forgotten what that felt like, I'd forgotten how happy I am when I'm creating something, even if it's amateurish. I'd forgotten the joy of learning a new skill, or immersing myself in a project that makes hours seem like minutes.


It's a film about London. About experiencing London, about being a Londoner, if even for a few months. Ever since I came here, I've been filming all over the place, intending to document my experience as a video at the end of this adventure. But this film is not just my experience. It's also that of 13 others.

What really struck me was the difference in perception. It should be no surprise, but the way I see London and Londoners was completely different from what many others thought of it. I think it really depended on what it was being compared to. For me, it's been a place of possibility, of excitement, of life. For some, it's been a place that felt impersonal and dead.

I've often been accused of thinking that people are far too nice here. But claiming that people are nice to me gets equated with innocence, which is strange. Knowing where I'm coming from - and I don't mean a place, necessarily, though Delhi more than qualifies - I find it hard to believe that people would accuse me of having a rosy picture of all humanity. The stories I've heard, read, and witnessed, people I've talked to or heard about, and having to basically just watch my back wherever I went really made me question the possibility of people being nice. Dangerous, sleazy, petty, competitive - all words I've associated people with like anyone else. But I refuse to paint everyone with suspicion if they have smiled at me or paid me a harmless compliment when our paths crossed for the briefest moments. It's people like that who've made my day, every day, in this country. That's not to say that I'd consider every citizen of this country warm and friendly, but I think I have the right to say that the ones I've encountered have largely been ready with a smile for me. If that makes me naive, so be it.

I've enjoyed making this film, and I'm glad I took a class that forced me to do it. Even if the final product isn't brilliant, I've learned so much along the way. I enjoyed talking to everyone I interviewed, conversing with some long after the camera had been turned off.


I've had so many conversations this year. With people I might never see again. I've always been someone that needed to have longer relationships with people because I didn't open up easily, but here it's become easier to talk to just about anyone and I love hearing what they have to say. Which is why I hate to think that we may never cross paths in the future. But sometimes, I just see these serendipitous connections as a web. We do leave an impact on each other just by crossing paths, by spending sunny afternoons in a park and sharing food and stories. Even if all we have is that afternoon. Everything here has been so enchanting yet ephemeral, so bittersweet, and if I could stop thinking in laters and forevers, all would be well. I give away bits of me to people and places, and take bits of them on my journey onward, or outward.

Some will become stories, others will remain anecdotes.