The 14th of July is a special day in France. It's their national holiday, often referred to as "Bastille Day" in the English-speaking world because this was the day of the storming of the fortress Bastille during the French Revolution (1789), and a symbolic awakening of the modern nation. 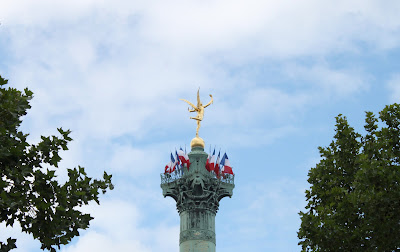 Today, no trace of this fortress/prison remains, and the square is called simply Place de la Bastille. The July Column, commemorative of the July Revolution of 1830, stands in the centre. The area is quite lively, with shops, restaurants, the Bastille Opera, a little tourist information kiosk, and our hostel was a couple of streets down from here. 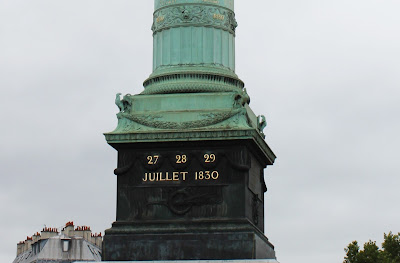 The 14th of July is witness to a huge celebration, with fireworks at the Eiffel Tower, a huge parade at Champs-Élysées, free entry to the Louvre, picnics at Versailles, and so on. Due to an awful error of planning, however, we failed to exploit any of this: my friend left for Amsterdam the previous night, and I was to leave for Germany that afternoon. I thought a quick trip to Versailles might be just the thing. But first, I needed to figure out where my bus to Germany left from. My e-ticket said "Gallieni", with no further clues whatsoever, and since two days are not really enough to figure out the entirety of Paris, I had no idea where Gallieni might be. Or what it was, for that matter.

It was finally a glorious sunny day, with a glorious blue sky, no trace of clouds, and the scent of festivity in the air.

I checked out of my hostel, left my suitcase in their luggage cave (it really was a cave)(like, with rough stone walls and everything) and made a beeline for the tourist info kiosk at Place de la Bastille. The people here were a friendly bunch, and we asked them stuff every day. They explained how I could get to Versailles (metro to Gare d'Austerlitz, train RERC towards Versailles, EUR 6.50 return). Then I asked them where Gallieni was, and, in what was to become the trend of the day, they were completely stumped.

They frowned, turned to each other, conferred, discussed stuff, made mysterious strokes in the air, pored over maps... After 15 minutes, I was told (while poring over a map) that it could be "either here, or here" - pointing to two spots very far apart from each other - but that I'd better ask someone else to be sure.

I arrived at Gare d'Austerlitz, bought a ticket to Versailles, asked the woman selling me the ticket where Gallieni was, and was told she'd never heard of it. I headed over to yet another info desk, the occupant of which was busy swapping life tales with a customer. A group of men and women in uniform stood nearby. Two of them, a woman followed closely by a man, came up to me and asked if they could help. No one in Paris ever hesitated to switch to English, unlike all the stereotypes I've always heard. They'd never heard of Gallieni either, though the man was persistant. He walked off saying "I will find it for you, madame", headed over to the chatting-info-desk lady, ignored her, pulled out a very fat book from above her head, and pored over it (unsuccessfully, again) for a few minutes. It was all really quite amusing. This is how life must have been before the internet. Hee.

On the train to Versailles, I called my friend in London and asked her to look up Gallieni since I wouldn't have time to hit a cyber cafe. The train was peaceful, though I was slightly restless, with a nagging feeling that I hadn't planned time too well. Then out of nowhere came the sound of an accordion. The most beautiful sound in the world. Always reminds me of Amelie. After he'd finished, the player came around grinning, smelling of alcohol, and I dropped a handful of change into his hat. He'd made my day. And the sky was still a shiny blue. 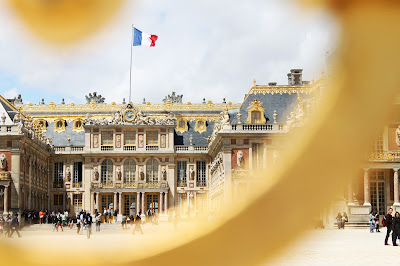 Versailles was golden. I didn't have a lot of time, and I hardly ever pay to enter places, so I took my fill of the gleaming architecture, walked in the sunshine, glimpsed the beautiful gardens. Here are some pretty photos. My friend called me with news: Gallieni was...a metro station. I couldn't believe it! A metro station that no one had heard of? Only in Paris.

I knew now where I had to go, it was the going that was a bit of a problem. Gallieni was at least 20 stops from Bastille, where I had left my luggage, and I had less than two hours till my bus left for Germany - the only one for the next two days. I ran to the train station, waited ten minutes for the train, was supremely hassled during the 30 minute journey (a nice dude asked me for my map, and had to say "merci" and "thank you" before I reacted with only a watery smile), reached Austerlitz, ran for the metro, reached Bastille station, ran to my hostel, dragged my suitcase up from the cave, ran to Ledru Rollin metro station (they could really do with escalators, hmph), had to change lines once, but made it to Gallieni with about 20 minutes to spare.

Got my ticket, checked-in, found my bus, and caught my breath.