The seven-hour bus journey from Paris to Heidelberg was beautiful, to say the least. Blue skies, green land, lakes, and even though the grey clouds caught up, at least there was a gorgeous rainbow to make up for it. My friend and her family picked me up at the Heidelberg bus station and we drove to their house in nearby Dossenheim. After bunk beds and shared bathrooms in Belgium and France, having a room all to myself made me feel rather pampered indeed, and that was before the midnight meal of ratatouille, rice, rhubarb cake AND strawberry cake. 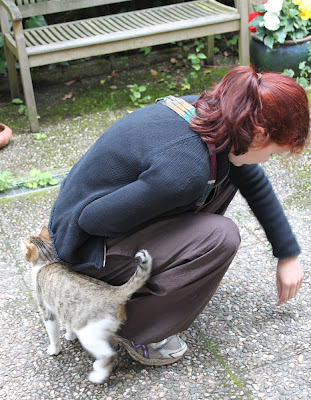 The next day was set aside as a "break day" in my journey, i.e. a day without an itinerary, a day of leisure. We made scrambled eggs, hung out with Zazu the cat and Coco the parrot, headed out for a late-afternoon ramble in the woods during which rain and shine competed fiercely for our attention (I would later throw away two pairs of socks), and ended up at the charming little cafe at Strahlenburg for tea and cake.

We made it back home to find a delicious dinner being prepared: Schnitzel, Kartoffelsalat (potato salad) and wine. To make up for not taking any photos of the meal, I asked my friend for their recipes; here they are, subject to my questionable translating skills:

1. Place the veal cutlets (Kalbsschnitzel) in a shallow pan.
2. Dredge with flour.
3. Beat 1 egg with 1 tbsp cream. Add salt and pepper, and mix.
4. Coat the cutlets in this mixture, and then coat in breadcrumbs.
5. Fry in vegetable oil and lard till golden brown.

1. Boil small potatoes and peel.
2. Gently roast onions in oil, chicken stock, salt, pepper, mustard and herbs.
3. Slice the potatoes.
4. Pour the onion sauce over the potatoes and mix.
5. Cover for an hour, stir every 15 minutes.

The awesome thing about staying with a German family was an opportunity to practise my rather rusty language skills. Conversation was solely in German, and after a nervous ten minutes of being confused and anxious, I caught on and really enjoyed the experience. The next few days gave me more such opportunities, and I conversed in German in shops, restaurants and even with strangers in Berlin, Prague and Vienna.

Heidelberg is a small town, as pretty as a postcard. It is famous for the University, but also - and I didn't know this - one of the foremost tourist spots in Germany. There were candy shops, restaurants, churches, a market square, the beautiful Neckar river, and up on a hill is Schloss Heidelberg (Hd Castle). 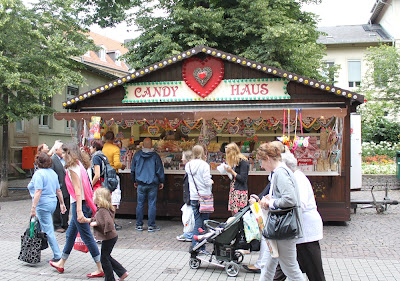 One of the most interesting places was the university student prison (Studentenkarzer; €1.50), old and graffitied within an inch of its walls. Heidelberg University traditionally maintained jurisdiction over its students, and any misconduct was not punishable by the state but led to confinement in this prison for up to 4 weeks. This became, in the 19th century, a matter of pride with most students vying for at least one stint in the prison. According to the info cards provided there,

"The most common offences included disturbing the peace at night by loud singing in the city lanes, inappropriate behaviour in public as a result of inebriation, and participation in illegal fencing duels. Budding academics seemingly had a particular foible for nocturnal raids aimed at releasing the pigs and piglets penned up in the Old City and then driving the squealing animals through the streets".

Other misdeeds included insulting the local constable or knocking his cap off with a stick. Its premises were shifted here in 1712 owing to unhealthy conditions at the previous location. After 2 days of bread and water, students could get food and beer from outside; they were free to mingle with each other and attend classes by way of a passage connecting the prison to the university. 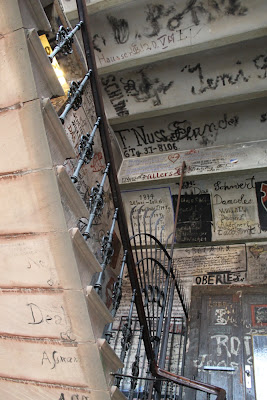 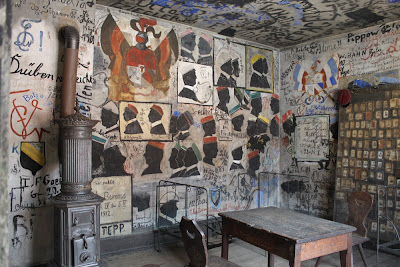 "The students' names for the various rooms included Solitude, Palais Royale and Sanssouci; The King's Throne was the fanciful name of the smallest and most private room in the prison" (from the info card at Karzer Heidelberg).

Getting to Schloss Heidelberg involves climbing 315 steps and an entry fee of €3. The castle was partly destroyed in the war in a gunpowder explosion, which is recreated in a firework show each year. 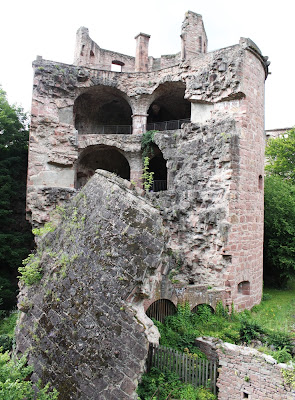 The fun of going there with N was that she could tell me all the legends/folk tales about the place. 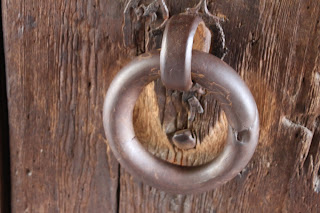 This door knocker is supposedly made of solid iron, and the king bade anyone that could bite it free to enter the castle. No one succeeded, but a witch did manage to make a dent (and break her teeth).

The castle is home to a huge wine flask - so huge that you could walk into it... 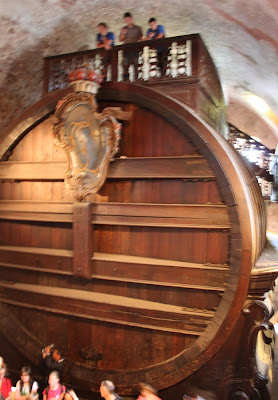 ...and an apothecary museum 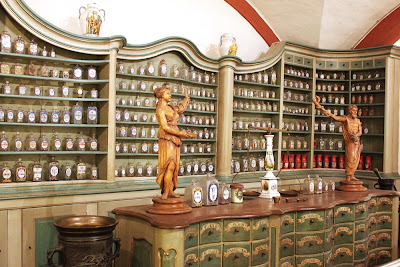 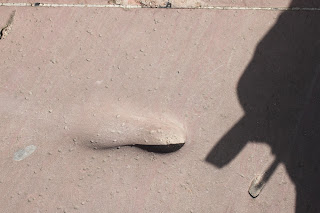 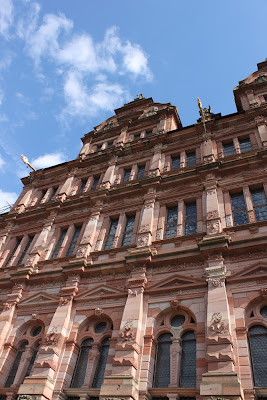 This gate was supposedly a surprise gift for Elizabeth (Stuart), made overnight. The side facing the outward entrance is beautiful, but the side that would have faced her quarters is raw and roughly hewn: 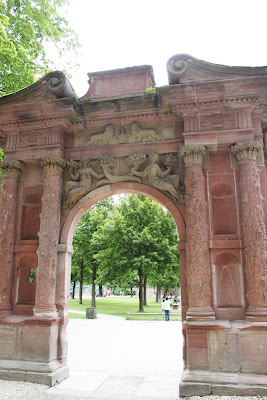 We also found Goethe in the garden: 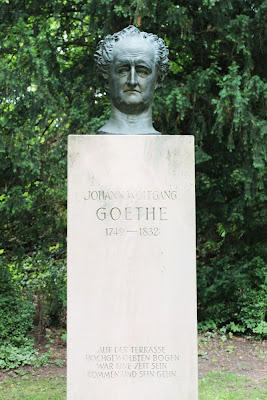