Berlin from (and below) the streets

Concealed under the U-Bahn stations of Berlin are bunkers and bomb shelters, remnants of its troubled past during WWII and the Cold War period. The continued existence of these is no secret - Berliner Unterwelten e.V. runs tours of these sites, taking tourists through the locations, and introducing them to the history as well as perceived future of these spaces in the event of a nuclear disaster or other emergency. For 8 EUR (student price; actual price is 10 EUR), I bought a ticket for "Tour 3: U-Bahn, Bunker und Kalter Krieg (Subways, Bunkers, Cold War)" - the tour is 90 mins. and the price includes a metro ride to and from the tour location. I hopped out to the kiosk next door for a quick bite - currywurst - before the tour began.

This was possibly one of the most interesting things I've done, but it was also mildly disturbing. To navigate underground, in darkness (following neon lights), looking at what is essentially a space meant to sustain survival in the barest sense of the word - equipped with beds, kitchens, oxygen - is sombre enough, but being told how inadequate it will likely prove to be is just depressing. Surrounded by this space, you can't help but envision a situation in which a group of humans may find themselves here, escaping certain death above ground; and because no photography or filming is allowed for the most part, it doesn't feel much like a tourist activity.

I was in Berlin for just over a day, and it feels like a lot of the places I saw were somehow related to the war/Holocaust - maybe because the city plays it up so much (it was an important part of its history, and you can see bits of the Berlin wall and various memorials all over the city), or maybe because I've always been interested in that period and so I sought them out. I did go to the touristy places too, like the Fernsehturm (TV Asparagus!), Marienkirche (St. Mary's Church), Rotes Rathaus (Red Town Hall) and Neptunbrunnen (Neptune Fountain) at Alexanderplatz, followed by Museumsinsel (Museum Island), and a short interruption in the form of rain and a buttery, jammy Schnecke (a bun shaped like a snail - schnecke in English is snail).


My next stop was Friedrichstraße, which used to be the last stop between East and West Germany before the fall of the Wall. The Reichstag looked glorious and menacing beneath a fiercely grey sky, and a girl made giant bubbles in the Tiergarten (Animal Garden), and people sheltered from the rain beneath Brandenburger Tor (Brandenburg Gate). 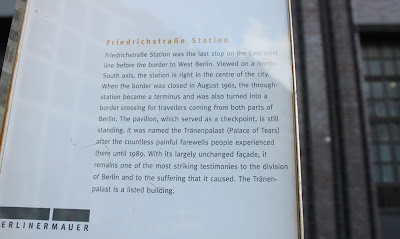 I then came across an open labyrinthine space that wasn't a cemetery but it was all I could think of. Below this was the Jewish war/Holocaust memorial, only I was on the wrong side of the road and so it took quite a lot of weaving between the towering grey stones to find the entrance. Wikipedia says that the architect, Peter Eisenman, designed this structure to create an uneasy, confusing atmosphere representing a supposedly ordered system that lost touch with human reason. The memorial was, like everything else in Berlin, well organised and highly informative, with all kinds of information media and services - even search facilities where you could search for names in a database and see what happened to those people.


One of my favourite things about Berlin is how the street itself is utilised as the site for art/memorials/exhibits - designed to withstand rain and often with audio to accompany the visual and written. This makes them more inclusive by not shutting them in a closed space but infusing them within the fabric of the cityscape, so that one is more likely to stumble upon them than seek them out. 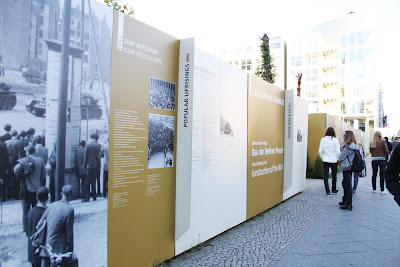 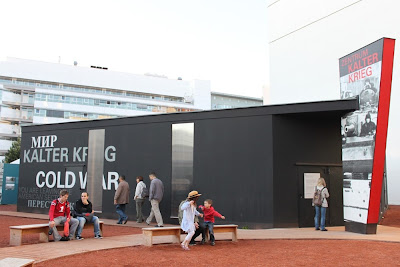 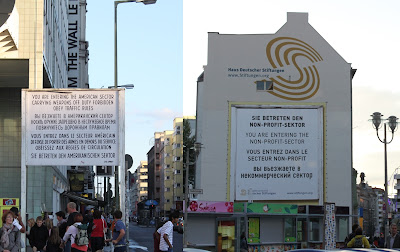 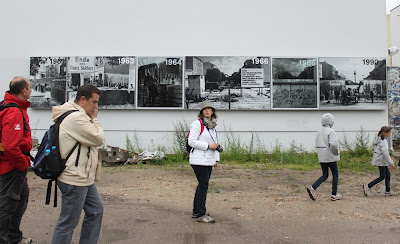 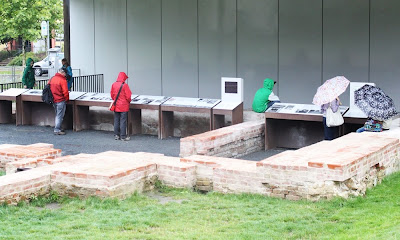 There is also a small and tranquil Chapel of Reconciliation here, where daily prayers are held for Jewish victims: 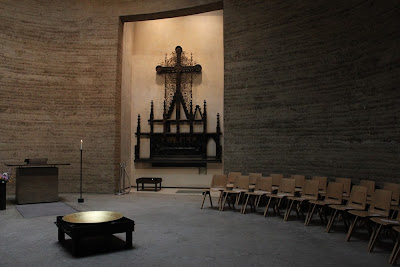 with this sculpture, "Reconciliation", outside: 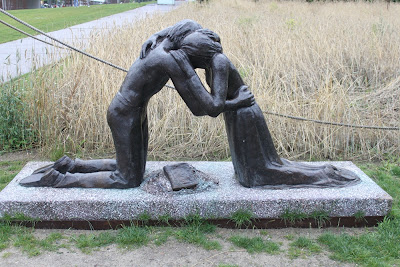 Created by Josefina de Vasconcellos as a call for reconciliation after WWII, copies of this sculpture exist at sites that were deeply associated with the war, including Coventry cathedral and Hiroshima Peace Museum. The Chapel and site are a part of the Gedenkstätte Berliner Mauer (Berlin Wall Memorial), which also include the Berlin Wall Documentation Centre and tower, and a 200ft stretch of the Wall.


I was here so long that I missed my bus to Prague.