August 25, 2013
This is the story of how making a film about time travel turned into a race against time.

Last weekend, I participated in the 48 Hour Film Project's Delhi chapter. I'm not quite sure what convinced me to do it; I'm definitely interested in film and film-making, but taking embarrassing videos of my friends (and of flowery fields, and bubbles...) is the extent of my film-making prowess. Well, I did make a short film for a class once and I don't think it was too bad. Anyway, so there we were, the five of us (joined by three others over the course of the weekend) attempting to come up with a story, script, storyboard, and shoot and edit a film in less than two days.

All the teams are given the same character, prop and line that they must include in their film. Additionally, teams are also asked to pick out a genre from a weird hat. This is the part that most people are nervous about, for good reason - what if you picked out "martial arts film", or worse, "operetta"? N and I discussed the genres and I distinctly remember saying that sci-fi wouldn't be too bad, though all I could picture when I said it were Lightsabers. So, of course that's what we got.

What followed was us coming up with a mildly weird story, which got weirder as the night wore on and we kept unearthing wondrous loopholes. For some reason, we were bent on killing a character but couldn't decide who it should be. We slept in the early hours of the morning, and woke up with dreams about car crashes and inspiration, so that the first thing we did was grab a notebook and pen. Then came the news of our lead actress backing out, and a minor war about which of us would have to take her place. I got out of that one, and I was neither the protagonist, nor the receptionist, nor the unlucky pedestrian who had to play dead (I did a couple of voice-over-ish things though). 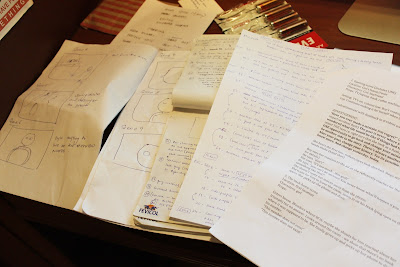 We then drove around Noida (which to me was basically uncharted territory, not unlike the Heart of Darkness. I mean, technically I was born there so it was my first home, but one-year-olds are too busy bawling and eating to notice much else.) looking for the perfect location for an accident scene. Shooting car scenes is hard. It took four hours, lots of driving up and down the same road, sudden brakes, an entertained audience, creepy stares, placating suspicious policemen, (deaf) jaywalking pedestrians, and buffaloes. But finally, we were satisfied just as the rain came pouring down. 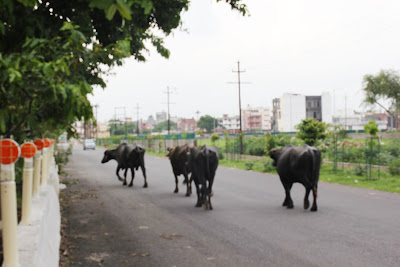 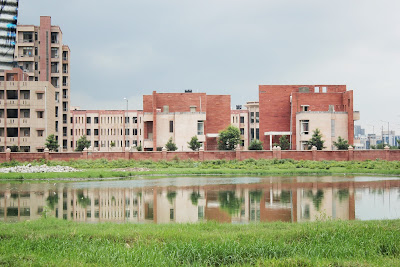 There was a maggi break before shooting again, and we were already exhausted. It was a night of coffee, alarms, lots of swearing, a few misunderstandings, grumpiness, red eyes...and night became morning as two hours of sleep apiece (we took turns) fed into exceeding desperation. All morning and afternoon we worked; editing, looking for sounds and tunes, checking that the paperwork and documents were in order. Perhaps it's the sheer thrill of feeling you're not going to make the deadline but trying anyway that makes this event so popular. Perhaps it's the act of making a film, watching it come to life, a million retakes and frantic editing later. Perhaps it's making friends out of creative people (and dogs) as you work toward a common goal. It couldn't be the two sleepless nights.

There was lots of laughter, lots of camaraderie, lots of great moments, but my favourite was probably when Casper the dalmatian trotted over to me and laid his lovely head in my lap. Maybe I am a dog person, after all.

We ended up with a film that wasn't too bad, albeit with a few inconsistencies (boo you, space-time continuum. And sci-fi), and found ourselves in a race against time as we sped to the drop-off location with half an hour to spare, only to be stuck in a traffic jam on the road outside the venue. There was no choice but to run, which felt bizarrely like a situation in a movie, and we heard a voice yell "five minutes to go" to add to the drama as we huffed and puffed towards the gate.

And here's the poster I made using a photo I took while one too many pedestrians (or was it buffaloes?) sauntered in front of our car... 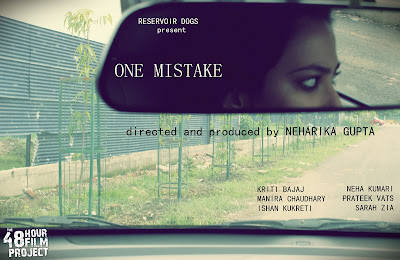