Of photo albums and the impatient generation

September 23, 2013
I was looking through photo albums from when I was a (seemingly) happy little tot when it hit me. We’ve become a generation that expects instant gratification, haven’t we? Of course we’re not going to wait for weeks to see how our photos are going to turn out, or for a much awaited letter to arrive (or worse, get swallowed into oblivion in the incompetent postal system; with email, at least it always turns up in the spam folder). We’re obviously not going to have healthy discussions over trivial facts (“You’re wrong!” “No, you’re wrong! Harry was the eighth horcrux!”) when we can hit touch (hitting is too much effort) some buttons on our smartphones to verify the facts. We’re most certainly not going to wait for a book we really want to turn up in a bookstore, or ask a friend of a friend to get that DVD with them when they next come to India when we’ve got Kindles and torrents and Amazon and Flipkart. To expect otherwise is absurd.

We’ve got the world dictionary
Even the clouds store data now. Everything is about gadgets and apps and clicks and pings and blips. So what if I feel like some omnipresent being is watching me watch videos of Jennifer Lawrence being funny, and I don’t mean god. So what if most of our waking hours are spent staring at some sort of rectangle screen, or that writing (not typing) exams for three hours makes our hands (literally) shake. So what if Google has little cars trawling streets everywhere making our houses visible on one giant map, or wants to replace our eyes with video cameras.

Some days it really feels like dystopia is just ‘round the corner. Other days, you really need “face time” with the boyfriend halfway across the world.

I will be lying if I say I didn’t panic slightly. I dug out my pretty Paperchase photo albums and arranged all the glossy prints from last year in sequence. They filled up nearly three albums. I calmed down a bit. There is hope yet. But then I started losing weight (and my temper) when the internet died for a bit. I mean, what the hell is that all about? How am I supposed to tell the world how I feel blog 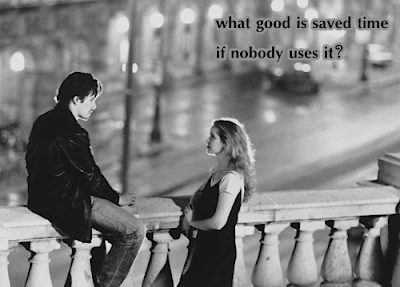 Obviously, it’s not all bad. Life has improved tremendously, and why else would we fall into this trap? We can’t ALL be stupid. Plus, going against the tidal wave of progress is clearly like fighting a losing battle, even though no one can really define the word “progress” anymore (what is it? Is it iOS 7?) Some of us are desperately digging out our parents’ film cameras and buying photo albums, because it would be seriously uncool to leave a legacy of impersonal hard disks with blurry photos of a concert we can’t even remember.

I suppose the key is to find a happy middle and not fight everything. Because everything eventually becomes obsolete. Rhyming poetry did, letter paper did, telegrams did, floppy disks did, the Travel Bookshop at Notting Hill did, BBM did, and so will we. We can buy typewriters, vinyl and vintage dresses (for now), but we can’t turn back time, and to be honest, for all its romanticism, we probably wouldn’t like it if we could. I mean, what if you met Jesse on a train to Vienna but couldn’t stalk him on Facebook for the next 12 months? And it would be so much easier to find Mordor with GPS, and just fly there, and then we wouldn’t need three whole books describing every twig on the journey to it.
And now I’m going to re-watch Midnight in Paris and Before Midnight for a dose of perspective on these troubling issues of nostalgia. Yay for torrents.