I got lost while exploring Berlin, and arrived at the bus station twelve minutes after my bus to Prague had departed. Due to a stroke of good fortune, though, there was another - a far more expensive one - leaving for Prague within the hour. The best thing about travelling by road in Europe is the gorgeous landscape that flashes past the window. Fields of dazzling sunflowers, emerald meadows, tranquil blue lakes nestled amidst a circle of trees that look so inviting you wish you could get off the bus and live there forever. Even the girls who giggled loudly the ENTIRE journey couldn't ruin those moments - or maybe the desire to escape humankind was because of them.

It was about 7pm when our bus rolled in, with a few hours of daylight still remaining. Prague took my breath away like no other city had (except maybe London - I always got similar goosebumps when I was on buses that drove by the Thames and Westminster). I couldn't stop staring at the water, the skyline, the architecture, the sheer feeling of having stepped into some sort of fantastical storybook. I couldn't wait to explore it. 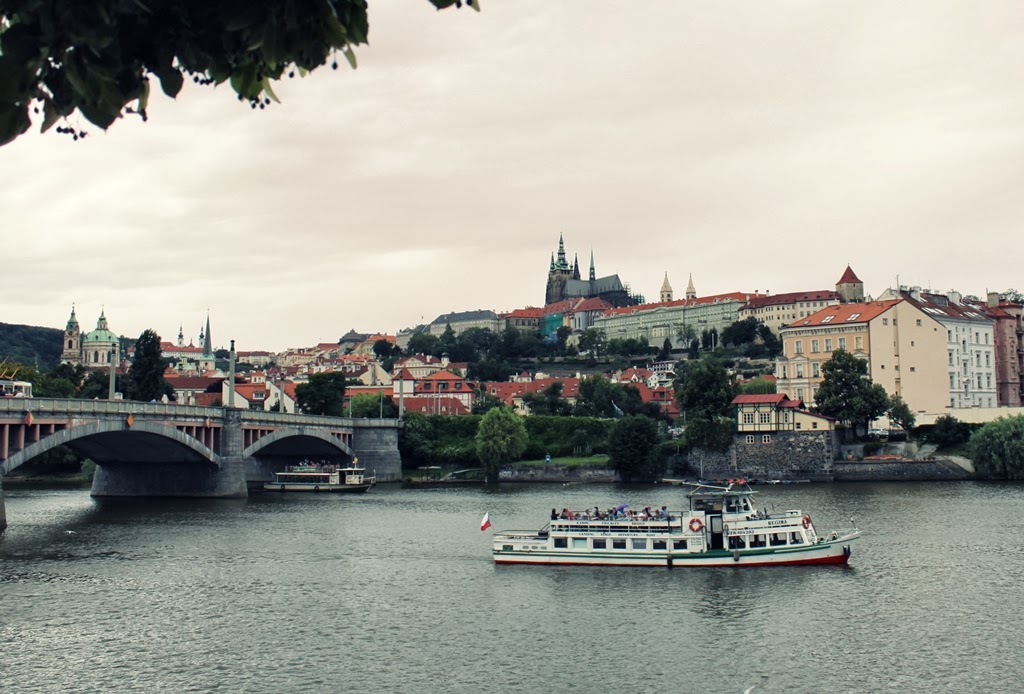 I read A Streetcar Named Desire (which everything I've read of Blue Jasmine reminds me of, can't wait to watch it!) while waiting for my friend to pick me up from the bus station Florenc. Prague was the first place where I keenly felt the strangeness of being surrounded by a language I didn't understand (I don't speak French either, but somehow it feels a bit more familiar) - which didn't last too long as a group of students from India came into earshot and I rolled my eyes at my book.

Of all the places I visited, it was actually summer in Prague. The weather was warm for the most part, though we had a few showers and strong winds. I spent most of the next two days walking around the beautiful city with friends new and old. The market was exciting, with all sorts of souvenirs, artifacts, fresh fruit...it helped that Prague was much cheaper than other places in Europe I'd been to. The Old Town square was picturesque but very crowded; we waited for the ancient clock to do its hourly chiming thing before I went up to the top, from where the entire city looked like it was made of Lego. We also witnessed the end of a wedding, with a Barbie-bride and old groom.


It was grey by the time we went across the Charles Bridge, with its cobblestone and tourists and music and paintings, and made a beeline for the first reasonably priced restaurant that had a traditional Czech menu. We shared svíčková (marinated beef + bread dumplings + cranberry sauce), followed by the most wonderful trdelnik (a type of sweet pastry) outside. Our final stop for the day was Petřín, accessible by tram, where the labyrinth of mirrors and beautiful views of the city were enough to satiate any appetite.

The next day started off lazy (and rainy) but my afternoon was set aside for an exploration of the fairytale-like Prague castle with the nicest companions imaginable. The castle complex is quite huge, with various halls, a cathedral, the Golden Lane (which I wrote about for The Culture Trip), among others. When buying a ticket, you can choose one that includes all of the sites open to visitors, or a partial ticket (which is what I went for). It gave me access to the gigantic St. Vitus Cathedral with its beautiful stained glass windows, the Old Royal Palace, St. George's Basilica and the Golden Lane (which I absolutely loved - full of little houses that have been furnished to mimic various Renaissance and other historical professions or famous residents - more on it later). There were also more gorgeous city views to be had, and the changing of the guard in their powder blue uniforms, which it turns out I find amusing no matter where I see it. This was followed by a walk/waltz in the cool breeze by the river Vltava, and a glimpse of the Opera and Dancing House before we headed to the metro.


Later, I thought about the lovely woman (who tried to talk to me in German because it was better than her English) who told me how brave I was for city hopping in Europe all by myself. It was quite an adventure, but I don't feel particularly brave. Truth be told, it's quite easy to travel alone in Europe, and it would actually be a shame to not do it. Everything feels relatively safe, help is forthcoming, there are enough women out and about even after dark, there are hostels where you bunk with dozens of people you don't know without really feeling queasy, and it's not even all that expensive to take buses across borders. In fact, the toughest part of the whole deal was the Schengen visa. I'll probably feel 'brave' when I manage to do it all in my own country.