Recently, while researching for an article for Art Radar, I came across a brilliant six-part documentary series on Al Jazeera titled Artscape - The New African Photography. Each of the 25-minute films profiles a photographer from and working in Africa, their journey, experience and project(s). 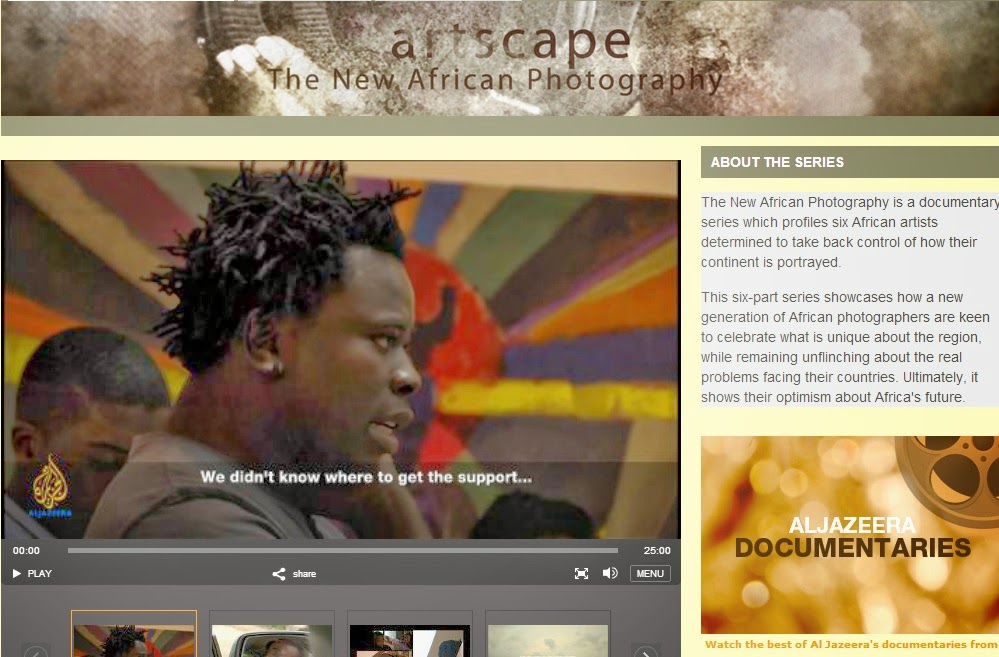 For a continent that has too long and too often been represented in the global media through a lens that focuses on aspects like poverty and exoticism, more often than not by those who are visitors and who pursue an image that they have been predisposed to find, this is a refreshing look at what's going on in the African art scene. The media also often forgets that Africa comprises of 54 countries, each unique, diverse and very different from the others (I'm not sure you'd see, for example, a documentary series on "European photographers"). Nonetheless, these videos provide an insight into the fascinating projects that these six photographers undertake, as well as their relationship with their art, country, and history.

Mario Macilau is a documentary photographer. Having grown up in poverty, acquiring his first camera through unusual means and pursuing photography with diligence against all odds, he now turns his art to similar social issues: documenting poverty in Mozambique. As with most Indian cities, he describes the ever-widening gap between the ultra rich and extremely poor; as we watch, he photographs the workers at a garbage dump, his compositions finding aesthetic beauty that is a stark contrast - and hence highlights - the hardships of these workers and their situation.

Baudouin Mouanda's project "The Dream" involves women in Congo and later in Dresden being photographed in various scenarios wearing the same wedding dress. I wasn't so convinced by the concept (every woman's dream is to get married and wear a wedding dress) but it was really interesting to watch the progress and reactions, and how Mouanda staged and framed his beautiful shots. George Osodi takes us on the journey of documenting the oil devastation in the Niger delta, his earlier project which made him a known name; and then we travel with him across Nigeria as he photographs royalty and provides an insight into how politics and monarchy go hand in hand in the country.

As with many other professions, it has been doubly hard for women to pursue their passion and elbow their way through the industry. Neo Ntsoma, who became the first woman to win the CNN African Photographer of the Year award in 2004, talks about her experience as a black woman in a South Africa in which Apartheid was still prevalent. She was the first black woman to make it to photography school there. Her early career as a crime photographer earned her the CNN prize but she was more attracted to the positive image of South Africa, and in this film she, along with fellow artists, musicians, designers and DJs, recounts her struggles but also her exhilaration at being a part of the new generation that was able to break the mould and follow their dreams.

Barbara Minishi's project is slightly similar to Mouanda's: it involves a red dress that she takes with her on journeys through Kenya, meeting and photographing women who are making a difference in their society. The dress raises interesting questions throughout the film (is it Kenyan? is it colonial? can you separate the two, can you separate history and identity?) and much of the film is also a discussion on being a woman, especially in a male-dominated profession.

In one of my favourite lines in the video, Minishi and her friend discuss the idea of an independent woman: "do we call men independent? We just assume that they are." Is anyone really independent? Should they be? What does it mean? Is 'independent' meant as a compliment only as far as women are concerned?

In another powerful scene, video and performance artist Ato Malinda, wearing the red dress and with her face painted red, talks about how much freedom women are still denied, and says "I would love to be able to walk in the streets of Nairobi at night." It's amazing and tragic how much can be similar across countries and continents, how some of us are still fighting for the most basic rights.

"I never left Nigeria, I just lived in Europe. I'm a border being. I live in two places all the time". Emeka Okereke proves that photography is a journey, literally, as he and fellow photographers venture on an Invisible Borders road trip across West Africa. They encounter problems but it's not the destination that a photographer maketh; art and beauty can be found amidst obstacles. Okereke is an inspiring teacher, as can be seen in the progress of the young photographer Lilian Novo, who he mentors, but also in the extremely insightful and quotable things he said throughout the film and that I obsessively noted down.