Notes from a year of line dancing 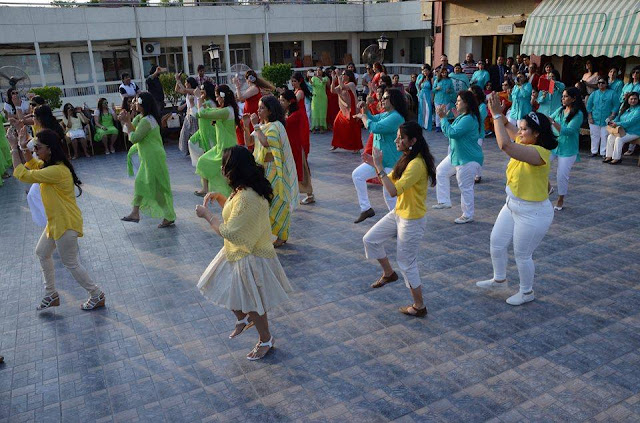 A slightly cooler Thursday found your newly instated friendly Frangipani* reporter braving the autos of Delhi rather more enthusiastically, eager to dance. Running into the Bridge Room – the new line dance HQ – she found all of 3 Frangipanis diligently practising the Caballero with their always lively teacher. The intimate group has grown smaller and quieter this summer as many of their number are globetrotting, from London to Argentina, but this makes little difference on the dance floor with lively music pulsing through the room.

Having heard rather a lot about the Lilies*, who practise for an hour after class and hang out at Ethiopian coffee houses – and even have their own representative columnist, your reporter decided to stay back and dance with (read: spy on) them. Two months’ worth of progress at being taken seriously was ruined as I became the “new kid” again. After being told that I must never replace the guru, and that attendance was “thin” today (the room was full; I hovered in a corner), we started dancing and all was forgotten, except the steps. We pranced our way through Good Times, Completely, Belly Dance and Muchachita, and though I was addressed as “beta” a few times, I decided that the Lilies are a nice bunch and there’s nothing like some friendly rivalry.

As June draws to a close, the rain and pleasant weather also seem to be waning. Your reporter missed the last three classes, but it was great to be back in the fittingly-named Rainbow Room on Thursday for a double feature, which included a tricky little number that I don’t yet know the name of. There is also a class to look forward to on Monday, but most importantly, what are we to do with ourselves for all of July?

But when you think about it, just like in line dancing, so also in life, it’s good to know when to move, when to take a step, when to pause, when to turn, when to breathe. Most of all, it’s important to go with the rhythm, be present and enjoy every moment.

On that note, keep moving, keep still, and keep dancing.

Yesterday, the frenetic Frangipanis met for their fourth practice session in our teacher's absence following V and HR’s initiative – we have been enthusiastic and active in July! The first was hosted by V at her house followed by lunch at Hauz Khas Village, and subsequent meets at the club’s Family Lounge (while our usual HQ, the Rainbow Room, gets a facelift). Aided by HR’s trusty suitcase which holds vital gear – a music player and speakers – and lead in turns by anyone who can accurately (we hope!) remember a sequence, we’ve succeeded in revising (maybe perfecting?) a fairly impressive repertoire.

And best of all, we welcomed back some of our group who’d been missing for a while. Highlights included S playing bhangra music every time HR’s back was turned, everyone trying and failing to remember the steps to “Twinkle”, and P telling us, over the usual coffees, how to avoid getting poisoned when we’re out drinking – so for all those who weren’t there, you missed a valuable piece of advice. Cheers to next time!

Your reporter is back on the dance floor after spending September in faraway lands, and happy to see familiar faces and tapping feet and baffled expressions complete with choruses of "I don't know this one!" even when we do! The all-new renovated pastel-hued Rainbow Room has given pleasant (no lizards yet spotted) but short-lived satisfaction... Monday found us back in the Bridge Room, and the dance continues. The Frangipanis welcomed some new members into our family, thrown into the ocean as we prepare to morph into a semi-impressive "troupe" for the VV Club Silver Jubilee celebration on 28th October – but they seem to quite enjoy it so far, am I right? One of our number has promised to wear a feather boa thing on the Big Night to live up to the reputation. We shall see. But I can now imagine our dear teacher shaking her head and saying we're not performers, that the point is to enjoy and not impress, to look inward, to dance for yourself. I suspect this philosophy is what keeps us coming back. So we look forward to welcoming our families and friends to our abode (or club) in one week's time for a night of connecting and reconnecting through dance. We're the Counting Team ("Counters" for short) – let the countdown begin!

It's been an eventful few weeks for us line dancers, and I've been a negligent columnist. I would make my excuses, but after M's gentle reminders I actually feel quite guilty, so here's an update AND a photo.

The Vasant Vihar club celebrated its 25th jubilee last month, and the Merry Feet family, resplendent in white, danced the night away. Guests joined many of the sequences, swaying and tapping to Pharell Williams' "Happy" and Nancy Sinatra's "Summer Wine", among others.

But there's no rest for the weary (I'm joking – we are never weary), and November meant diligent practice of a brand new number for the 7th terrace evening. The Frangipanis went all-out Trini with Fadda Fox's cool song about hiding from stuff you don't want to face, welcoming three new pairs of feet to our gang. There was also the wonderful Diwali party + S's birthday celebration hosted by N at her beautiful home: the perfect way to ring in the festive season.

Today, we met under the November afternoon sun in matching colours, scarves and even flowers; as M said, line dance has come a long way from cowboy boots and country music. We cheered each other on and reinforced the reason for coming together – sometimes we get caught up in appearances and forget what really matters. Here's to dancing our way through winter!

March is the month of madness and pollen and exams and rain and hail and new leaves – and spring is, of course, a time for our florally-named clubs to blossom. Monica certainly seems to think so; we've probably learnt more new numbers in these two months of 2016 than all of last year put together – from Beyonce to bachata, with reactions ranging from dazed to thrilled (me) at this challenge.

The Frangipanis also welcomed back some of their tribe who'd been missing for a few months, adding a lot more...energy to our classes as we leave winter behind. And there's a whole different kind of energy as we prepare for the upcoming terrace evening in early April, practising our top-secret "Bird Dance" (read: samba) moves. If anyone's looking for us, we'll be the ones flapping around in yellow.

* The class groups or clubs are named after various flowers.