October 25, 2020
One year ago, we escaped from the craziness of Mumbai to the rains of south Goa – my second visit, and second monsoon there. The trip was a pastiche of our interests, from architecture and long walks to distilleries and bakeries, with a few (mis)adventures and changes of plans (for the better) thrown in.
Beaches look very different in this season. My favourites were a private beach in Varca and the small beach at Cavelossim, where I largely loitered taking photos of creatures and people. 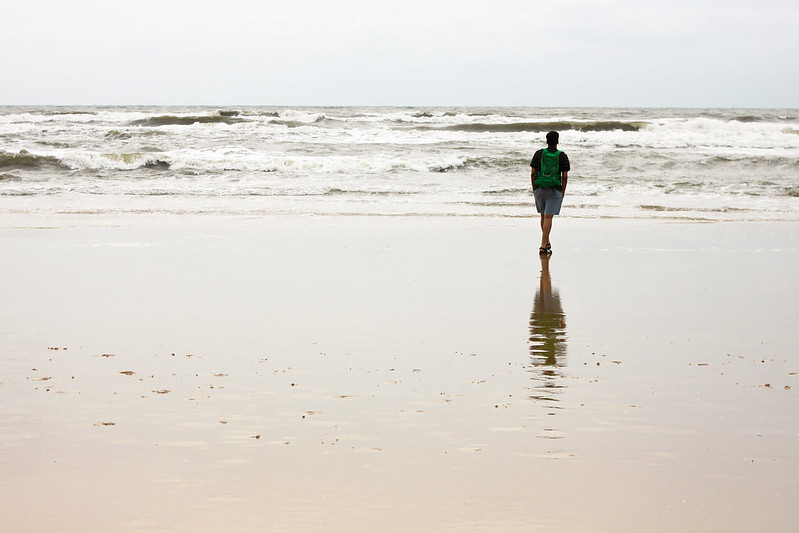 – instinct told me otherwise – but found this discovery quite fascinating.
After a walking breakfast of Jila Bakery's divine custard-filled eclairs, we entered Loutolim. Long walks were not only interesting but often inevitable, given our lack of reliable transportation (we returned our rented scooty after a day, finding the roads too slippery). There was no dearth of bright, colourful houses with windows and lamps swathed in sheets of protective plastic.
– Casa Araujo Alvares, a 250-year old mansion named after the eponymous colonial-era lawyer, where we saw interesting urns (below) and hanging beds; and then on to Figueiredo's.
Figueiredo House lies in a flower-lined street facing lush paddy fields. It was built in 1590, and houses beautiful china, silver, furniture, chandeliers, textiles and much more. We missed the usual tour but appreciated the dedication of the guide who showed us around, and the carefully maintained artefacts.