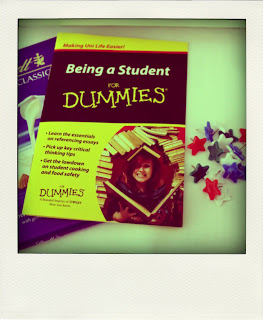 
What a fun way to start a post after so long! I was woken up at 8 this morning, after having slept only 4 hours, by the utterly high-pitched shrieking of the fire alarm. I tried to ignore it, which is quite impossible, and when my pillow wouldn't shelter me from it either, I decided to go see what the fuss was all about.


Now, in India, we don't have fire alarms. We do have fire extinguishers in select buildings (homes aren't one of them) like schools, where teenage boys, being teenage boys, usually use them to hit each other with. Or was my school just weird? Anyway. There's a lot of paranoia in this country (remember the Guy Fawkes night bonfire and fire crackers that I couldn't get near? Hmph. Give me Lohri and Diwali any day.) but rest assured, we will never be toasted in our beds. Which brings me back to the alarm. I detest alarms in general, and this one beats the two alarms I set to wake me up (and fail miserably) in the morning afternoon by a humungous margin. We are obliged to grumble and walk down five flights of stairs and stare up at the building suspiciously for signs of non-existent smoke. It's all quite exciting. I mean, what's not to like about a group of pyjama-clad students, most of whom in this case have not had the chance to brush their teeth or comb their hair, standing around in a freezing courtyard staring blearily (and quite often angrily) trying to find someone to blame? Admittedly, this is the first time I've been woken up by one of them (last time when it rang at 4am, I was up because my laptop decided it wanted to get a killer virus and die, don't you know) and that wasn't so fun, but after sleeping 4 more hours rather soundly, I've got all my perspective back. The whole spiel just makes me giggle. Someday, when I'm sixty and aging, I'm really going to miss all this and smile.


So, going back to the first line - quite a digression, eh? - it's the time to write essays and study for exams again! I don't know why I'm doing this to myself. But I have a plan. It involves humour and an open mind. I mean, what has stress really ever done for anyone? As everyone around me tears up and tears their hair out, I'm going to watch Gilmore Girls (nothing like listening to Lorelai's incessant chatter to cheer you up) and buy the Hitchhiker's books for my study breaks. Since I'm so easily distracted anyway, might as well use my distraction time to the fullest.


I've been getting around a fair bit in the last few weeks, which makes me happy because it was one of my main aims coming here (the other being to study, of course. Heh.). I meant to do long detailed posts on all of them, but I have boring essays to write. They don't usually start out boring but they ALWAYS manage to get there. Anyway. So after Cardiff came Swansea. Charming town, charming hotel, pictures are here if you look around a bit. In Mumbles we saw a castle and met a really charming man, who was blind and had been EVERYWHERE - we had conversations about Delhi traffic and Rome - and saw Welsh love spoons at the Love Spoon Gallery and had lunch by the sea. In Bristol, we tried looking for a place that opened at 7am, and plonked ourselves there groggily for a couple of hours pretending to eat and drink while really catching winks of sleep. We also saw a gorgeous cathedral, an observatory, a camera obscura, a humbling view, and streetfuls of graffiti. In Greenwich a few weekeends later, we saw a sunny stretch of park, a museum, a painted hall with tons of candlesticks. We didn't see the meridian because I'll be damned if I was going to pay £5 to see an imaginary line. We did see Amitav Ghosh, who was there talking about his Ibis trilogy (felt like I'd come full circle - I attended his talk about the first book in Delhi 4 years ago). Some gems:

"Growing up in India, you read about eating potted meat in Cornwall." - Amitav Ghosh (so true, Enid Blyton, anyone?)

"When I was in Oxford, I remember looking at the beautiful scene with the weeping willow and the stream and thinking it's so typically English. Well, it's Chinese." - Amitav Ghosh

"It's really the women that transmit history and culture; the men just do their business and go off somewhere to die." - Cliff Pereira

In Norwich, I saw more castles, a mustard shop and spent my evening being enchanted by Tchaikovsky's Nutcracker suite.

Oh my, will you look at the time? I'm going to be late for class! Brrpfff.