Growing up with Anne Shirley


In 2011, when I was packing for my move to London, I decided to put only one book that I had already read in my suitcase. I would be living in a different country and away from my family for the first time, and Anne of the Island, I thought, would be like a friend when I felt alone, especially for the first few days while I got used to my new life.

But this third installment of L.M. Montgomery's Anne series, by far my favourite, remained unopened on a shelf in my tiny but cosy new room for much longer than I'd anticipated. I gained friends within a few hours of landing, so that on my first night – much like Anne when she first arrives in Kingsport after calling Avonlea home for so long – I found that I was not miserable, and went "calmly and sensibly to bed and to sleep."

However, in many ways, Anne was a great comfort that year. It felt a bit like we were living parallel lives. Though I had recognised her as a kindred spirit since the day I picked up Anne of Green Gables at the age of 13, I had never quite felt that our lives were anything alike. This may sound rather obvious – she is an orphan, living on an island off Canada, and her story is set more than a century before I first picked up the book. I, meanwhile, have lived most of my rather sheltered life in the capital of India, where pristine beauty is hard to find.

That year in London, however, I could relate to Anne: she left a place she knew to study in a new one, finding a new world and circle, and growing through learning – not just in classes but through experience. This was an Anne who wasn't told what to do by an adult, she was one. She still had her daydreams and playfulness and fancies, but she also grew into responsibility, and learned that the imagination has its pitfalls, and that we have to make and fix our own mistakes if we get second chances. I turned to this book for its familiarity and advice, for answers (especially during flat hunting the next summer, Priscilla's words brought empathy: "houses, houses everywhere, and not one for us.") I remembered how much I loved walking and nature, and that there was nothing better than having a tree outside my window to greet me every time I entered my room. I named it, of course. I even had my own favourite graveyard nearby where I often went for a ramble.

This year, I decided to re-read the first three books in the series, and was reminded again how soothing they are to the soul. If I had to pick one word to describe the series, it would be "wholesome" – much like Anne's character once she grows into it, and a lot like her life. Not much like mine, but I hope I'll get there. 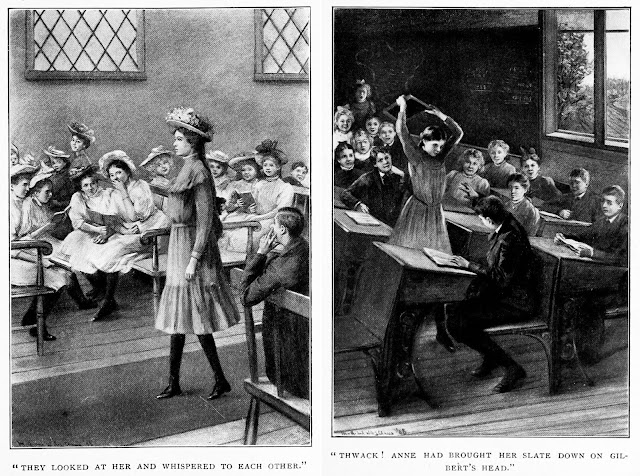 Anne of Green Gables is my favourite coming-of-age book. Growing up, I could empathise with a girl who daydreamed and talked too much; who could "see poems" with "beauty-loving eyes"; who kept wishing away her red hair much like I wished to be...um...taller. We both had a love for literature and fantasy, and imagined ourselves as characters in stories (movies in my case), and as writers one day. We both sometimes offended people with our big mouths and snippy sarcasm. We were both innately ambitious, and wanted to know what there is to know about things. Re-reading the books, I realised how much they have influenced my own writing and thinking, and I basked in those familiar turns of phrase that I've come to use so often over the years – kindred spirits, the bend in the road, an epoch in my life.

From these books, I learned to appreciate the little things, the everyday blessings, the detours and the anecdotes that life is made up of.

I believe the nicest and sweetest days are not those on which anything very splendid or wonderful or exciting happens, but just those that bring simple little pleasures, following one another softly, like pearls slipping off a string.

– Anne Shirley in Anne of Avonlea

They gave me some of the strongest, most unconventional female heroes I've come across in literature, and probably taught me about feminism before I knew what the word meant. It's not just that the women are more than supporting characters because the stories are told from a woman's point of view; it's because we are given many instances of how they and their success was viewed by the wider community. Financial independence and further education for women is an important theme – Anne is the first woman from Avonlea to go to university, and Marilla tells her when she's still in high school that she believes "in a girl being fitted to earn her own living, whether she ever has to or not."

Female friendship takes centre stage for the first three books, superior to any romance (yes, even Gilbert "Dreamboat" Blythe). These women aren't passive and submissive. They support each other, whether it's the calm steadiness of Diana, or the matriarchal household managed by Marilla and Mrs. Lynde. There's the clan at Patty's Place: the wisdom of Priscilla and Stella, and the delightful defiance of Philippa. There are peers, but there are also mentors and enablers, from Marilla to Josephine Barry and Aunt Jimsie. Where would Anne be without them? Reading the books, I felt thankful to have inspiring women among my own friends, though we may not see each other often, and to have worked mostly with intelligent, motivated women since I started my career.


Then there's Anne herself, as good a role model as anyone could ask for, despite – or because of – all her rough edges. She is, as Josephine Barry says in the recent Netflix adaptation titled Anne with an E, "a person with many possible outcomes", or as Montgomery writes in Anne of Avonlea,

Those who knew Anne best, felt, without realising that they felt it, that her greatest attraction was the aura of possibility surrounding her [...] She seemed to walk in an atmosphere of things about to happen.


I confess that I think of her as someone to emulate: her warmth, her humour, her sense of righteousness and goodness. But I think what has always charmed me most about Anne is her grace, which is as much as part of her as her fire. She taught me softness, how silent sympathy helps in times of grief and loss, how to strip the superficial but still be occasionally silly. It's as though all the dreaming and looking into faraway stories have caused her to know something more than the rest of us.

But as I read the books this time, I found myself becoming envious; Anne may have come from struggle – and her life had its share of tribulations – but from the time we enter into her story, she finds and retains a feeling of belonging. All the titles bar one feature the word "of", reiterating this: Anne of  Green Gables, of Avonlea, of  the Island. The world she belongs to grows as she does, but each place is within, is part of, the larger, and she considers herself a part of them.

It's disconcerting to feel such a sense of unbelonging in my own life. I'm still in search of a place I want to call mine. Delhi has never been it; even before I had experienced other lands, I have a memory of watching the planes pass my window and wishing I was on them. It wasn't so much about wanderlust as it was about escape, an awkward disconnectedness that I haven't ever been able to overcome here. For a while I felt like I could belong in London – that hum of harmony that a place which inspires curiosity and creative stimulation can bring.

It would be nice to wake up and feel excited about what's out there.


Once again, I found refuge in Anne of the Island. As much as it's about adventure and friendship and love and learning, it's a book of lessons, of broken dreams and ideals, of moving on and letting go. Like Anne, I still build castles in the air, but also feel the rumpling of spirit when yet another ideal is less than I'd hoped, and the dreariness of the mundane. I suppose that's what it means to grow up: there's always something else to worry about.

It's fun to be almost grown up in some ways, but it's not the kind of fun I expected, Marilla. There's so much to learn and do and think that there isn't time for big words.

It's not that I don't appreciate what I have, because I do. I've been very lucky and very loved, and I've put down some roots. Being in the depths of despair after my return from London, combined with other events at the time, meant that for a while I lived with one foot here and one elsewhere, thus living nowhere. I learned my lesson. I know now that home is probably more a feeling than a place, and that it requires effort (in some places more than others, but there's "scope for the imagination" there!) to make it your own. The later books in the series perhaps illustrate this: Anne belongs to Avonlea, but wherever she goes, she makes it hers too: Anne of Windy Willows, of Ingleside, and even, with barely a stretch of the imagination, of Redmond, of Patty's Place, of her House of Dreams.


And then there's laughter. Growth is a well-developed sense of humour, a theme I noticed more keenly this time.

[...] He said, 'Humour is the spiciest condiment in the feast of existence. Laugh at your mistakes but learn from them, joke over your troubles but gather strength from them, make a jest of your difficulties but overcome them.' Isn't that worth learning, Aunt Jimsie?

– Phillipa Gordon and Aunt Jamesina in Anne of the Island


So here's to more laughter, more big words, more bends in the road, more "pruning down and branching out."