Mrs. Rachel and Marilla sat comfortably in the parlour while Anne got the tea and made hot biscuits that were light and white enough to defy even Mrs. Rachel's criticism.

This year, I've got a new project up my sleeve, one that combines books and food and photography. Each month, I plan to cook or bake one dish mentioned in a book I enjoy, and hopefully discover something new about the characters, try new recipes, and hunt for new ways to make images of food on the one table in our apartment that is exposed to good lighting. 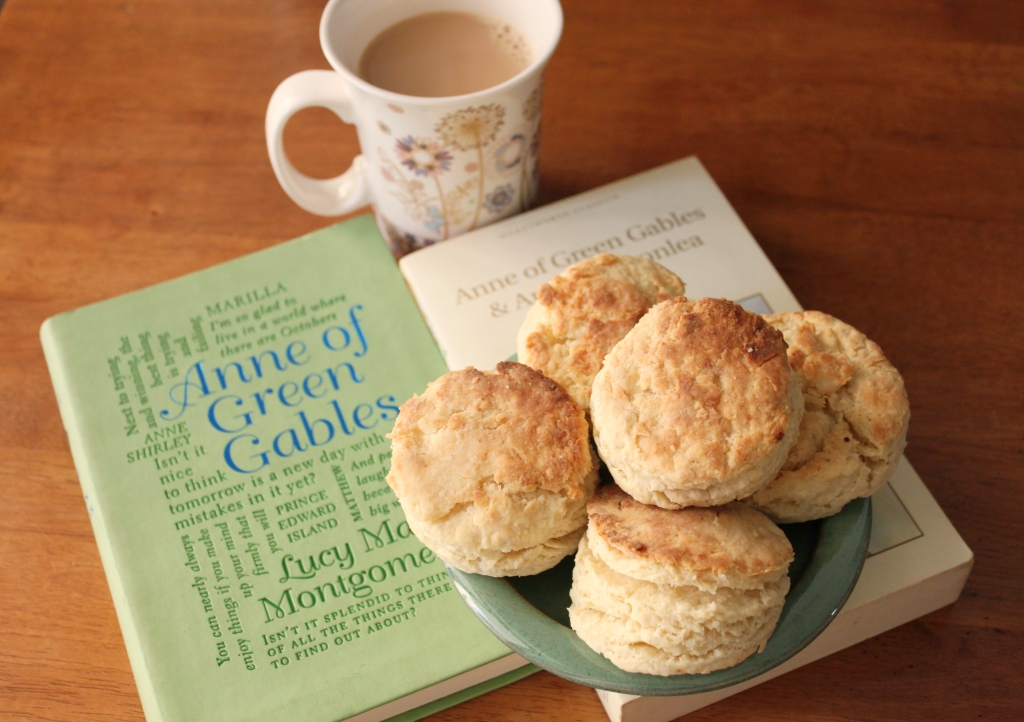 In honour of new beginnings, I thought I'd start with my favourite series, and I have a good reason for choosing these biscuits in the first book from among all the cakes, pies and preserves on offer. (A shout-out here to 36 Eggs for compiling an exhaustive list of every food item ever mentioned in the Anne books!) As unassuming as biscuits may seem – indeed, I didn't remember them at all until I went looking for mentions of food – they mark the very first time we are told that Anne Shirley has created something faultless in the kitchen. To be sure, Diana thought that Anne's layer cake from a few chapters ago was "perfectly elegant", but Di is known to be generous with compliments. It's when a perfectionist like Mrs Lynde can't find anything to criticise that one has truly arrived.

Anne was, for want of a better word, unfortunate when it came to food in those early years, especially when company was involved. In chapter 13, Anne says, "I can't cook, as you know", hoping that Marilla will bake her something for a picnic. Marilla agrees, elaborating on the ingredients that make a good cook:

As for cooking, I mean to begin giving you lessons in that some of these days. But you're so featherbrained, Anne, I've been waiting to see if you'd sober down a little and learn to be steady before I begin. You've got to keep your wits about you in cooking and not stop in the middle of things to let your thoughts rove all over creation.

Anne wasn't used to rich, wholesome delicacies prior to her life at Green Gables – we learn that she has never tasted ice cream – but most of her accidents involve carelessness rather than a lack of skill, and provide endearing comic relief. Only Anne would mix up raspberry cordial and currant wine because she didn't taste it, or vanilla and anodyne liniment because she had a cold, or forget about a mouse drowning in pudding sauce because she was lost in a daydream. Her culinary training probably begins soon after, for we learn eight chapters later that Anne can now bake a pretty mean cake, an opinion supported not only by Diana but Marilla too, who agrees to let Anne bake a layer cake for tea with the Allans. But, alas, "cakes have such a terrible habit of turning out bad just when you especially want them to be good". 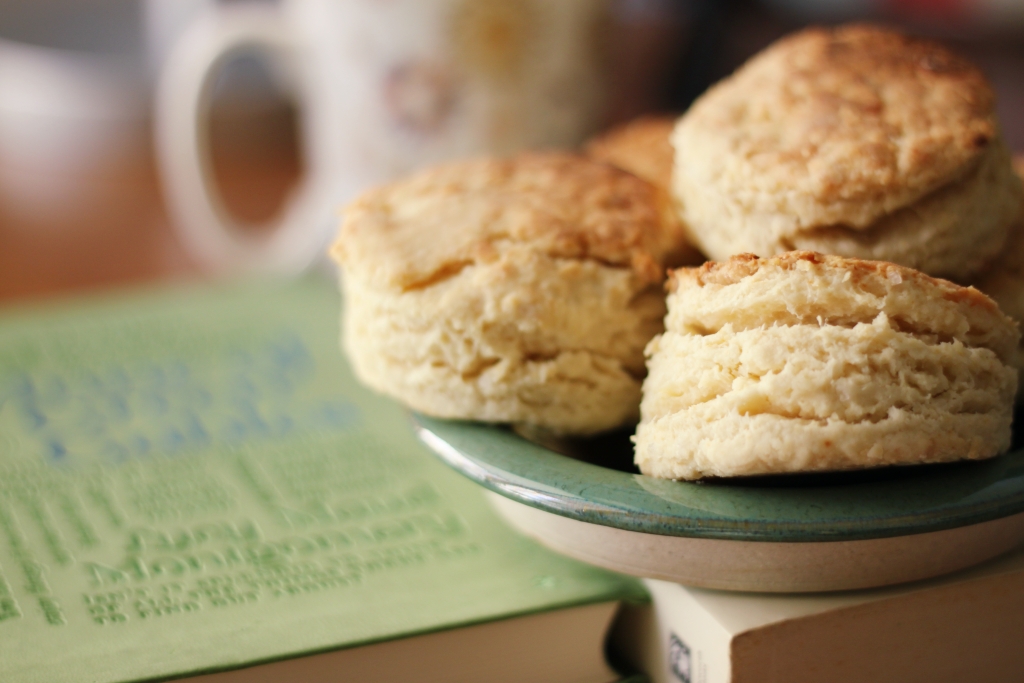 By the time Anne bakes the light, white biscuits, however, she has come into her own, a star student, and a (mostly) level-headed one at that, ready to start a new chapter at Queen's Academy; and though it isn't explicitly stated, it seems safe to assume that there have been fewer accidents in the kitchen over the years. I'm not the only one who thinks that the biscuits represent a triumph of both her culinary skills and her character – Mrs. Lynde says, right after this teatime experience:

I must say Anne has turned out a real smart girl," admitted Mrs. Rachel, as Marilla accompanied her to the end of the lane at sunset. "She must be a great help to you.

She is," said Marilla, "and she's real steady and reliable now. I used to be afraid she'd never get over her featherbrained ways, but she has and I wouldn't be afraid to trust her in anything now.

The biscuits represent a declaration; the two strong female figures in Anne's life, who have no qualms critiquing her – and who understand that being a good cook is not more important than an education and the ability to earn a living – verbally concur that Anne has "turned out so well" despite their misgivings and her former fanciful ways. She goes on, of course, to become the first woman in Avonlea to go to college, and is able to feed herself, at that.

I didn't know exactly what kind of biscuits were being referred to, other than being "light and white", and googling this led me to a buttery recipe that I ended up using because once I saw the photographs, I couldn't get them out of my mind. In "A New Departure in Flavourings", Anne tells Diana that the "baking-powder biscuits" for a different occasion will be baked right before tea – a search for these yielded similar-looking results – and The Anne of Green Gables Cookbook, written by no other than Montgomery's granddaughter Kate Macdonald, interprets them as "Ruby Tea Biscuits", which add jam to the last step before baking.

This research would have been far easier had I not been possibly the last person in the world to realise that biscuits refer to something completely distinct in North America. They're more of a soft, savoury quick bread (though the word "biscuit" etymologically means "twice-baked bread", which should make it crisp, right?), so it makes sense that they would be consumed fresh out of the oven. I discovered this right before I was due to start baking, so of course I had to research more. An article from July 2020 suggests that making biscuits – "fluffy handfuls of melt-in-your-mouth goodness" – is a tradition still going strong on Prince Edward Island, much like "bygone days". There's even a book dedicated to them, The Biscuit Bible (September 2020) by PEI native Dolores Griffin, though it remains to be seen how seriously they are taken:

Full of interesting facts, historical information and stories about biscuits, Dolores Griffin’s The Biscuit Bible is everything you ever wanted to know about biscuits – which are so versatile and easy to make. [It] contains tested recipes, tips and techniques, baking tales from Island seniors, the origins, the science, some history behind the ingredients, and original biscuit jokes by the author.

I also found this article from The New York Times encouraging, in which Christopher Kimball is quoted as saying,

The secret of biscuits is that they are dead simple, and you should be able to make them in your sleep or even in the midst of a blind-drunk hangover. To hell with the gourmet stuff.

And so I began.

Involving only six common ingredients, the instructions seemed like the antithesis of the limited baking recipes I've tried so far – the flour and butter must not combine, the dough should look crumbly, and must be handled gently and quickly so that the butter doesn't melt. Speed in baking is not my strength; I'm not yet confident enough and usually re-read instructions several times during the process, massively underestimating the amount of time I'll need. Nonetheless, I mixed flour, sugar, salt and baking powder in a large pink bowl, and grated cheerful yellow shavings of cold butter into it. Adding cold milk and a few gentle stirs with a spatula seemed to result in what I hoped was an appropriately lumpy mixture, with chunks of butter still visible. I transferred the blob onto a floured surface, coaxing it together, patting and folding with my hands (more advice from NYT – "Do not fool with a rolling pin. A rolling pin has no place in biscuits".) The first two circles I cut out looked perfect, if I say so myself. 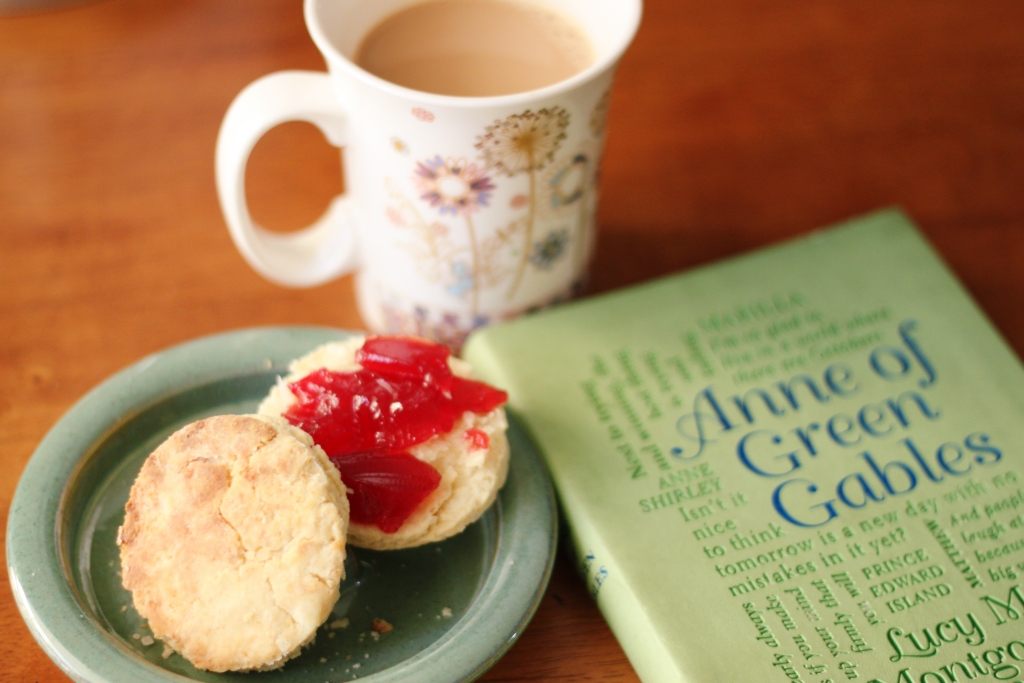 My biscuits came out from the oven not quite done, and went back in again for a bit to get some of the golden-brown going. Having never seen or tasted them before, I was nervous about making them too crisp, and I decided to leave them be when they somewhat resembled the photos on the internet, painting on a little melted butter on top. I'm not sure they were quite as light or white as Anne's, but I certainly enjoyed them at breakfast, lunch and teatime with a dollop of jam.